The bitcoin price has soared by over 10% in the past few hours to over $47,000 just after NatWest Group chair Sir Howard Davies expressed his support for a ban on cryptocurrencies to mirror that recently introduced by China. Sir Howard, a former deputy governor of the Bank of England and former chairman of the Financial Services Authority is one of the most senior and respected figures in the City and has been particularly critical of the cryptocurrencies trend. 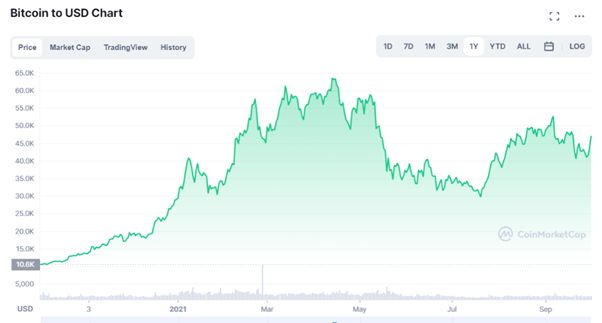 Sir Howard, who describes his position on cryptocurrencies as “very hostile” said that the trend, which has led to more Brits now owning cryptocurrencies than stock market investments, is seen by NatWest as the “biggest worry” it currently has. He argues the sector should come with the same warning as Dante’s gates of hell, which bore the inscription “Abandon Hope All Ye Who Enter Here”.

He also said that while he didn’t agree with a lot of Beijing’s financial services policies, he very much supports China’s recent decision to enforce an outright ban on cryptocurrencies. The UK’s Financial Conduct Authority has taken a more circumspect approach, warning investors in cryptocurrencies like bitcoin that they should be prepared to lose everything, but otherwise leaving them to make their own decision. In June it was estimated around 2.3 million had decided to invest in cryptocurrencies despite the FCA’s warnings.

Sir Howard says cryptocurrencies are now the leading source of fraud and financial crime while their volatility and lack of inverse correlation to safe-haven assets like gold mean they serve no useful purpose to investors. He also said the amount of power needed to run cryptocurrency networks is an environmental disaster. He concluded:

“It’s gambling as far as I can see, with a sort of libertarian veneer on top of it.”

Despite last week’s blanket ban issued by China and government vow to uncover and prosecute any company or individual offering “illegal” cryptocurrency activities, the bitcoin price has today soared by around 10% in a matter of hours. The rapid gains appear to be a response to a sharp decline in the value of the dollar after labour data released yesterday indicated a significant rise in the number of U.S. jobless claims.