NatWest share price down 2.5% as government announces it will sell more of its shareholding

The NatWest share price dropped by a little over 2.5% today on the announcement the UK government will start to gradually sell off a significant portion of the 55% it still owns in the bank it bailed out in 2009. Formerly known as The Bank of Scotland, the UK taxpayer stumped up £45.5 billion to save the bank from collapse in 2009 at the height of the financial crisis.

That saw the Treasury take a 79% stake in the bank at an average price of 502p-a-share. That’s since been reduced to 55% at a loss and the next tranche of shares to be returned to the private sector will also be at a huge loss with the share price currently sitting at 194.09p. 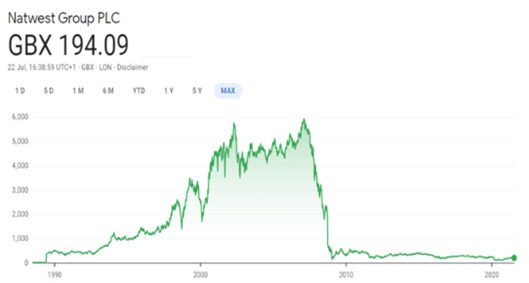 The government said it will “dribble out” shares in the bank over the next year at prices it considers represent “fair value” to the UK taxpayers who indirectly bailed the bank out. That will be done by selling shares numbering up to 15% of recent trading volumes which would suggest up to three million shares a day when it decides to sell. The process must be managed carefully to avoid the sell-off depressing the share price.

Analysts believe that means around 5% of NatWest’s total equity will be sold by the government over the next year, reducing its stake below 50%, including buybacks, and bringing around £1 billion into the Treasury. A similar process was used when the government sold off £14 billion of stock it held in Lloyds Banking Group, which was fully returned to private ownership by 2017.

The government started selling off its stake in the bank in 2015, reducing it to a little below 73% with the holding being brought down to 62% in 2018 and sales this year reducing that further to the current 55%.

Analysts believe the development is generally positive for investors in the bank as it should improve the stock’s liquidity.

The government has stated it plans to sell off its entire shareholding by 2026. Analysts also expect the bank to launch a major buyback programme when it publishes its half-year results next week, which could see £800 million returned to investors including dividends. Buybacks will be financed by some of the excess capital NatWest was obliged to build up as a buffer against the economic impact of the Covid-19 pandemic after the regulator dropped the requirement.