The NatWest share price is down 2.25% as we move into the last couple of hours of the trading week, despite the bank, formerly Royal Bank of Scotland, posting a £4.3 billion profit. The profit represents a major turnaround from the still majority taxpayer-owned bank’s pandemic-hit 2020, which resulted in a £351 million loss.

Last year’s return to form was helped along by £1.3 billion in cash that had been set aside as a buffer against defaults during the pandemic. That cash was released back into the bank’s working capital last year and boosted the bottom line after the fallout from the pandemic proved last severe than initially feared. An initial impairment charge of £3.2 billion was set aside in 2020, leading to the year’s loss. 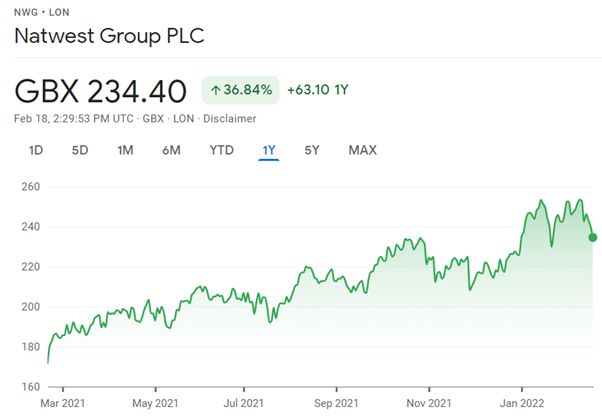 The strong performance last year will come as a relief for the NatWest Group chief executive Alison Rose who took over in November 2019 and had barely had a chance to settle into her office before the Covid-19 pandemic struck. NatWest, one UK’s largest retail banks, has been majority owned by the taxpayer since it was bailed out at the height of the 2007-08 financial crisis.

Soon, the taxpayer-owned holding in the bank will slip below majority ownership. The government has been gradually selling off its stake and it now stands at a little under 51%. Rose’s mandate has been to lead NatWest into the future, putting the baggage of the years of irresponsible growth that led to the need to be rescued from collapse behind it. Changing the name to NatWest Group from Royal Bank of Scotland Group was one initiative to that end.

However, being majority state-owned didn’t mean NatWest escaped the scandal of breaching money-laundering rules that has also tarnished the reputation of many of its peers recently. In December the bank was fined £265 million for failing to strictly enough enforce anti-money laundering measures. While other British banks including HSBC have been fined in the USA, NatWest is the first to have been prosecuted by the UK’s Financial Conduct Authority for failures that took place between 2012 and 2016.

The bank’s staff will share a bonus pot of £298 million for last year’s performance, which is a 44% increase on last year’s when it was cut in recognition of the impact of the pandemic. The pot is 3% lower than it was in 2019 before the pandemic struck.

Shareholders, including the Exchequer, will receive a final dividend of 7.5p-a-share adding up to £844 million. A share buyback worth up to £750 million will also be initiated taking total capital returns for 2021 to £3.8 billion.

Pre-tax profits excluding discontinued operations came in at £4 billion compared to a 2020 loss of £481 million.