The Netflix share price suffered a 5.7% fall in afterhours trading, adding to a 1% slide during the day, after the film and television streaming company fell short of analyst growth forecasts. The company had previously warned that stellar growth over the previous two quarters, which came in ahead of Wall Street expectations, would likely mean slower growth in future quarters, with new subscribers front-loaded. 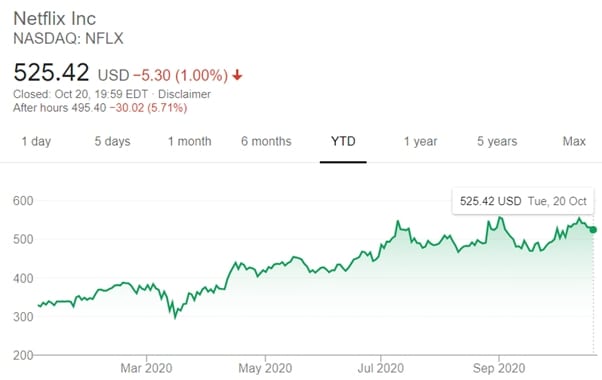 That prediction has proven accurate, with 2.2 million new paying subscribers added over the three months to the end of September. The total was well short of analyst expectations for 3.8 million, and even fell short of the company’s own more conservative forecasts of 2.5 million.

Over the previous two quarters, subscriber numbers leapt with households forced to spend more time at home over Covid-19 pandemic lockdown measures. That would appear to have accelerated the progress of potential subscribers along Netflix’s sales funnel, resulting in smaller numbers still to be convinced to take the plunge later in the year.

After its particularly strong second-quarter report, which saw it add nearly 26 million paying subscribers over the first half of the year, Netflix warned the pandemic had “likely pulled forward some demand”, which would be reflected in subsequent quarters.

The concern will be that in developed markets such as the company’s domestic market in the USA and here in the UK and other parts of western Europe, Netflix’s penetration levels have now reached a point that growth will inevitably slow. That tipping point looks like it has been accelerated by the rush of new subscribers earlier in the year. With the added impact of new competition in the form of rival streaming services from the likes of Disney and Apple.

Another disappointment for investors came in the form of the forward guidance Netflix issued for the current quarter. Wall Street analysts had estimated 6.8 million new subscribers would be added. Netflix believes 6 million is more realistic.

Third quarter profits also missed estimates by around $200 million, despite rising to $790 million compared to $665 million a year earlier. Revenue reached $6.4 billion compared to $5.2 billion over the same three months in 2019.

How growth fares over the next several quarters will be watched closely by Netflix investors, who will be especially keen to see what impact new rival streaming services like that of Disney will have. Will large numbers of consumers be willing to pay for more than one streaming service offering different content? Or will they more often make a choice on which to opt for?