The Netflix share price has recovered from an early 1.5% loss in after hours trading after reporting a disappointing quarter of subscriber growth and offering forward guidance for the summer period that fell short of analyst expectations. The video streaming industry’s market leader told investors it anticipates it will add 3.5 million new subscribers over the summer quarter covering July to September, instead of the 5.5 million stock market analysts had tipped.

Despite that disappointing prediction, the Netflix share price has recovered from early after-hours trading losses and was actually up by 0.6% as the Wednesday morning Asian session drew to its close. Investors appear to have decided to take a ‘glass half full’ approach after growth over the quarter to the end of June of 1.54 million new subscribers came in slightly ahead of forward guidance. 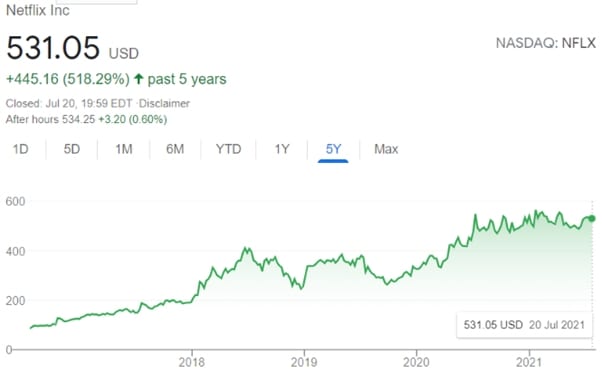 2021 was always likely to be a complicated year for Netflix after the huge growth in subscriber numbers the technology company benefitted from over the first year of the Covid-19 pandemic. As countries around the world entered lockdown and households were forced to find ways to keep themselves entertained at home the streaming service added 36 million new subscribers to take its total past 200 million. 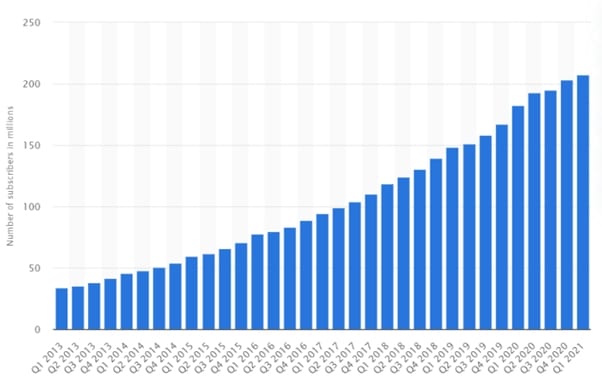 The company always said it expected that to mean it had frontloaded subscriber growth and a shallower pool of potential new customers would lead to a slowdown over the subsequent period. That has proven accurate with 10.1 million new subscriptions added over the second quarter of 2020, compared to the 1.54 million reported yesterday for the same three months over 2021.

Year-on-year revenue growth of 19% to $7.34 billion over the three months to the end of June was a reflection of the numbers of new accounts added over the quarter 12 months earlier. That boosted net income by 18% to $1.35 billion.

Netflix started life in 1997 as a DVD-rental postal service before taking advantage of the rise of the digital era and cloud computing to put together an on-demand catalogue of film and television that subscribers could stream directly onto their televisions, and then mobile devices. It also now spends vast sums of money producing its own proprietary TV series and films including Stranger Things, Sweet Tooth and The Irishman and Roma, which won an Oscar for Best Foreign Film.

Netflix is still the video streaming market leader by some distance but faces growing competition from a host of new market entrants including Disney and Apple.

The company said yesterday that it is optimistic over how it will perform in the year ahead after the 2020-21 anomaly has passed, yesterday saying it still sees a “long runway for growth”. The international market away from the USA and already mature secondary markets like the UK is still seen as holding huge numbers of potential subscribers. Netflix commented:

“As we improve our service, our goal is to continue to increase our share of screen time in the US and around the world.”