The Netflix share price has plunged by almost 26% in after-hours trading, wiping a quarter off the streaming market leader’s valuation after it reported its first net subscriber loss in ten years. The FAANG stock saw its valuation soar over the Covid-19 pandemic as new subscribers flocked to take advantage of the streaming market’s rich catalogue of films and television. But while spending more time at home during lockdown periods and other restrictions encouraged new subscribers to take the plunge, their easing has started to see some cancellations.

Netflix has always cautioned investors that pandemic conditions were front-loading new subscribers from its potential pool of customers in the international markets where it operates. However, with the slowdown over the past few quarters perhaps milder than many anticipated, it appears those warnings were forgotten and markets have taken fright. The company’s prediction that it will see another net loss of 2 million subscribers over the current quarter appears to have compounded investor negativity. 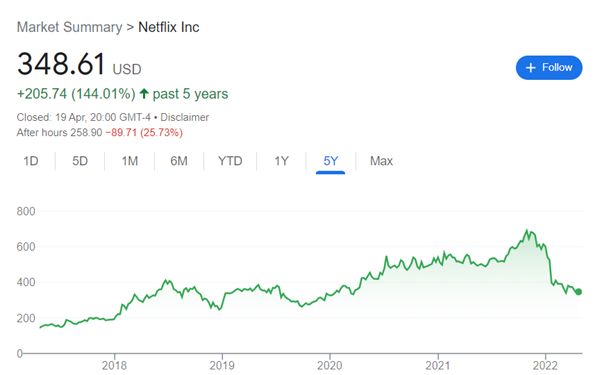 Increasingly hot competition is also a major factor. While Netflix is still the streaming market leader by some distance, it has been losing ground to new rivals like Disney+, Apple TV+ and HBO Max. The company said around 100 million households also use its service without paying through the accounts of family and friends.

While it has regularly cautioned investors that the rush of new subscribers during the first year of the Covid-19 pandemic and the end of pandemic restrictions would hit subscriber numbers growth, the net loss also appears to have caught Netflix by surprise. The tech giant had predicted very modest growth and lost around 200,000 subscribers despite the release of new hit shows including the second series of the period drama Bridgerton. It now has around 221.6 million.

The Netflix share price was already down almost 42% since the beginning of the year before the current after hours losses after yesterday’s announcement and its overall valuation below pre-pandemic levels. The new losses will take its market capitalisation well below where it sat in early 2020.

While revenues did rise by almost 10% to $7.87 billion for the quarter that fell short of analysts’ predictions for $7.93 billion. Net income for the three months dropped 6% to $1.6 billion.

The net subscriber loss would not, however, have happened if not for the suspension of Netflix’s service in Russia after the country invaded neighbouring Ukraine. It had 700,000 paying customers in Russia. But 600,000 subscribers were also shed across Netflix’s domestic market of the USA and Canada. Those losses were partly offset by “nice growth” in Asian markets such as Japan and South Korea.

In its quarterly letter to shareholders Netflix wrote:

“Our relatively high household penetration — when including the large number of households sharing accounts — combined with competition, is creating revenue growth headwinds. The big Covid boost to streaming obscured the picture until recently.”

Chief executive Reed Hastings also announced the company will introduce a cheaper subscription plan that includes advertising. It’s something it has been reluctant to do over the years but rival Disney+ introducing a similar offer appears to have forced Hastings’ hand as he commented:

“Those who have followed Netflix know I have been against the complexity of advertising and a big fan of the simplicity of subscription. But as much as I’m a fan of that, I’m a bigger fan of consumer choice.”

“Allowing consumers who would like to have a lower price and are advertising-tolerant [to] get what they want makes a lot of sense. That’s something we’re looking at now.”