The Netflix share price eased by just under 0.5% yesterday, before adding 2.3% in afterhours trading. The afterhours gains were realised despite the video content-streaming company releasing a Q4 earnings report that included missed new subscriber targets on its domestic U.S. market and a pessimistic outlook for the current quarter. The negatives were, at least as far as investors are concerned, balanced out by positives, such as overall subscriber figures coming in just ahead of schedule. 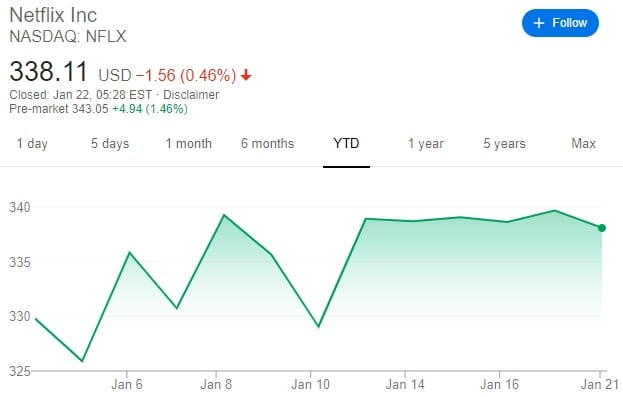 Negatives were the company missing its target for United States-based subscribers and issuing Q1 forward guidance for 7 million new subscribers. That is 800,000 shy of Wall Street expectations for 7.8 million new paying customers to be added over the first three months of 2020.

With a current valuation of over $148 billion, Netflix has evolved from the rental DVD-by-post business it was founded as in 1997 into one of the world’s largest digital services companies. It is the global market leader in subscription based television and film video content streaming – a market which is growing quickly. The business model has disrupted the traditional television and cable market to such an extent that traditional media companies are now adapting their own offerings in the direction of subscription-based streaming. Netflix has taken advantage of its ‘early bird’ entry into the television-and-film-on-demand streaming market – one it can be argued it has been the founder of.

However, while Netflix has not been without competition, namely the streaming services of Amazon Prime and Hulu, the competitive landscape in which it operates is now undergoing a significant change. Disney (which also owns Hulu) and Apple have also recently launched their own video streaming subscription platforms and WarnerMedia, recently formed by the merger between AT&T and Time Warner, will also launch a major Netflix competitor this year.

Many of the other big, traditional television and film media companies and conglomerates are also planning streaming services. For example, the BBC and ITV have recently teamed up to launch ‘Britbox’ – a streaming service for shows from both channels, plus Channel 4 and Channel 5. The BBC has also partnered with U.S. documentary giant Discovery on an extensive,10-year partnership deal for a new streaming service focused on natural history and factual programming. It will be available internationally, though not in the UK itself, and will launch sometime this year.

Netflix is undoubtedly moving into a new stage of its development – one in which its overall market is significantly larger than it has been. But one in which it will face far more intense competition than has so far been the case. The next several years will see the future media landscape shaped, with the results of the ‘streaming wars’, playing a major role in that.

Meanwhile, Disney is bringing forward the launch of its Disney+ streaming service in the UK and western Europe by a week. The service, which offers on-demand access to Disney’s full back catalogue of films and television shows, as well as new spin-offs and original creations, will now be available from March 24th. It has been priced at £5.99 a month, or £59.99 a year.