Television and film streaming service Netflix yesterday announced first quarter results that demonstrate the company is set to become one of the winners of the Covid-19 lockdown period. The video streaming market leader added 15.8 million new subscribers over the first three months of the year – more than double Wall Street’s forecast for 7.4 million.

The positive news drove the Netflix share price up 5% in afterhours trading to set a new record high. It had dipped by 0.84% during the Tuesday session. Netflix’s share price is now up more than 30% for the year compared to a 12% loss for the benchmark S&P 500 index. 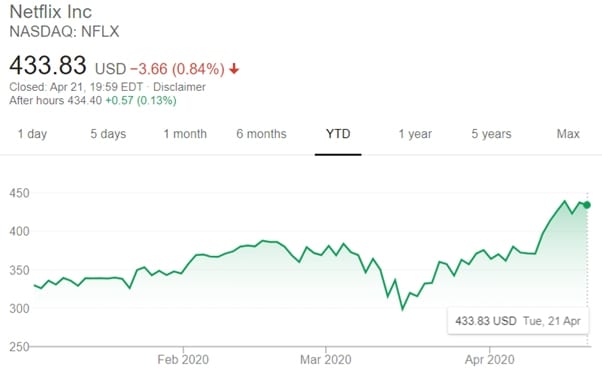 Netflix did however urge caution, telling investors that it believes the boost to subscriber numbers and viewing figures is temporary. It sees a stronger dollar, which already weighed on its first quarter, as becoming a negative influence on global sales and profits over the coming period. The company also expects growth rates to decline once the Covid-19 lockdown comes to an end, with a letter to shareholders reading:

“We expect viewing to decline and membership growth to decelerate as home confinement ends, which we hope is soon.”

Revenues over the quarter that ended March 31st were up 28% on the same period last year, reaching $5.77 billion against Wall Street forecasts for $5.74 billion. Net income grew to $709m, from $344m a year ago. There was also an unexpected positive cash flow figure of $162 million for the quarter and Netflix is now forecasting free cash flow for the year to come in at negative $1 billion.

The company had expected to burn through $2.5 billion as it continues to invest in growth and original content. However, a significant portion of planned spending has been delayed due to production on new content being forced into shutdown since mid-March.

Wall Street analysts had been tipping Netflix to benefit from the pandemic-induced lockdown but it will still be pleasing to the company and investors that results ran ahead of even heightened expectations. Hit new shows such as Tiger King, the murder mystery ‘docuseries’ that has attracted a whopping 64 million viewers, have helped.

Supporting Netflix’s position that user growth can be expected to revert to the mean once lockdown ends were figures that demonstrated January and February numbers were roughly as projected. The beginning of the March lockdown prompted a surge over the last month of the quarter. That’s reflected by the fact most new gains came from non-U.S. territories. The USA went into lockdown later than most of the rest of the world, waiting until the end of the month to introduce tougher restrictions.

7 million new subscribers were signed up across Europe, the Middle East and Africa with another 3.6 million in Asia. Overseas subscriptions, however, generated less bottom line income than would have been expected due to the strengthening dollar. A stronger dollar means less dollar revenue per new overseas subscriber once local currency subscriptions are converted back.

Netflix is facing up to a period through which it will have to deal with increased levels of competition with several new streaming services recently launched. Apple, Disney, HBO and U.S. telecoms giant Comcast have all recently launched their own streaming subscription apps, adding to existing competitors such as Hulu and Amazon Prime.

For Netflix and the rest of the streaming market, the challenge over coming months will be keeping users engaged with new content following production shut-downs. Netflix has said that over the current second quarter the only notable impact will be foreign language dubbing falling behind in some areas. In Italy and Spain, for example, voice actors have been unable to work in studios.

Netflix has said it expects the Covid-19 boost to subscriber numbers to normalise by the end of June. Its current internal forecast for new users added over the second quarter is 7.5 million, but cautioned “given the uncertainty on home confinement timing, this is mostly guesswork.”

Asia stocks rise on US stimulus