Bernard Looney, BP’s chief executive since he last week succeeded Bob Dudley, has said that he has already reached the “inescapable conclusion” that the oil and gas giant must completely eliminate its carbon footprint over the next 3 decades.

The verbal commitment, being appraised as ‘the boldest of any of the oil majors on the environment’, appears to signal a major change in culture at BP. In the past the company has been accused of dragging its heels on climate change policy. But with the new man at the helm directly stating “we are heading for net zero. There is no turning back”, after barely a week in the job, it looks as though BP has now sets its course in a new direction.

Mr Looney has wasted no time in setting the tone for his period as CEO, and eventual legacy. He chose to focus on the “huge opportunity” the move towards cleaner energy represents for BP. That stands in direct contrast to the old oil and gas executive position of considering clean energy as an existential threat, even if couched in more diplomatic terms, or not directly voiced.

But Looney has now directly outlined that over the next 30 years BP understands it must transition towards becoming a producer of ‘green energy’, with any residual oil and gas production decarbonised.

That would presumably be achieved through a combination of emissions capture and offsetting. Achieving a ‘net zero’ carbon footprint would have to extend to BP cutting carbon emissions not only from its own operations but also accounting for emissions resulting from customers using oil and gas it continued to sell. BP’s current carbon footprint is estimated at around 415 million tonnes of CO2 equivalent a year.

In 2019, BP recorded profits of $3.5 billion and the company’s capital expenditure totalled $15 billion. Only $750 million of that, 5%, was invested in green energy. That underlines the extent of the kind of change in strategy and resource allocation that would be necessary for BP to reach a net zero carbon footprint within 30 years.

Prominent critics of BP’s environmental policy cautiously welcomed the pledge made by Mr Looney. It was described as “the ambition the world needs” by Edward Mason of the Church Commissioners for England.

Sophie Marjanac of the environmental law charity Client Earth, which has previously been critical of BP over advertisements it perceived as ‘greenwashing’, called the new commitment “a welcome step change for the industry”, before adding:

“We welcome the company talking about declining oil and gas production over time, but there needs to be more explanation about how offsets and carbon capture and storage can realistically deliver the company’s decarbonisation ambitions.”

She cautioned that carbon offsetting schemes should not be relied on as a license to continue polluting and that leaving fossil fuels in the ground is the only genuinely sustainable approach.

Mr Looney has admitted that at this point he does not know exactly how BP will meet his 2050 net zero pledge but that doing so will require an ongoing process and strategy. He promised more details and short-term targets would be set out during a strategy report to be published in September.

He also used the opportunity to offer some details on his plans to “reinvent” the oil and gas major by instigating its biggest organisational restructure in 100 years. He was at pains to reassure investors that going green would not see the company’s dividend compromised.

“BP will commit and remain committed to its distributions policy and we will partake fully and wholly in the energy transition.”

That reassurance doesn’t seem to have entirely convinced investors, who today sent the company’s share price down almost 3.5% by 11 am. 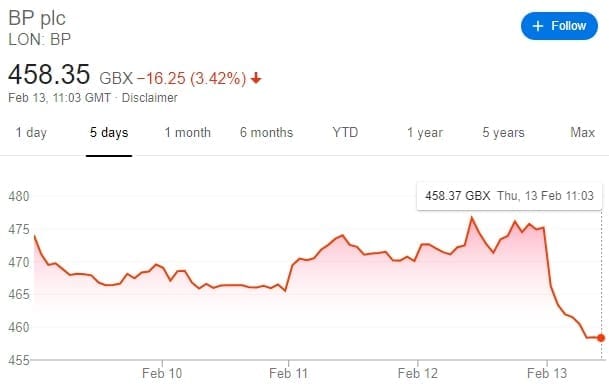 The terms offered to The Coca-Cola Company (TCCC) would be less favourable than the... END_OF_DOCUMENT_TOKEN_TO_BE_REPLACED