A recent YouGov poll of more than 10,000 people indicates that as many as 1.4 million UK-based patients are acquiring cannabis on the black market to treat their conditions. The poll’s findings are likely to increase pressure on the government to move further towards legalising or relaxing the laws around medical cannabis.

The poll’s results suggest that up to 3% of the UK’s adult population self-medicate with cannabis. Up to 250,000 sufferers of arthritis are using the drug as well as around 100,000 cancer patients and 50,000 multiple sclerosis sufferers. Almost all of them still buy cannabis illegally, despite the first steps towards making medical cannabis being available on the NHS being taken last year.

The YouGov poll showed that of those self-medicating with cannabis, more than half use the drug every day and spend an average of £163 a month obtaining it. That adds up to a UK black market for medical cannabis worth more than £2.6 billion a year. 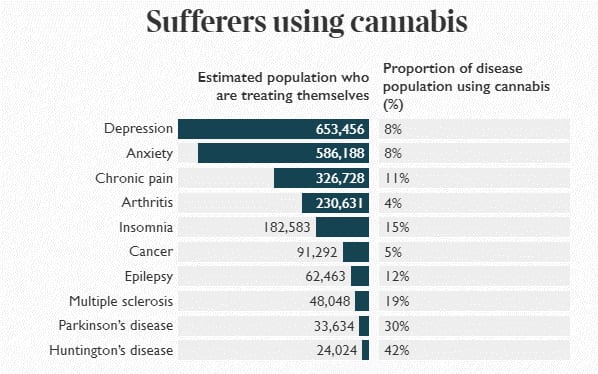 The strict conditions under which medical cannabis can be obtained by prescription over the NHS, as well as teething problems in the supply chain meaning that it can be difficult to get hold of even with a subscription, mean many patients feel they have to continue to rely on the black market. Access is much easier for those patients with the means to pay for a consultation and private prescription.

Under current laws, anyone caught with black market cannabis, regardless of if it is being used to treat a medical condition, face an unlimited fine, up to 5 years in prison, or both. Practically, few people found growing or holding quantities of cannabis small enough to be considered for personal use are actually prosecuted. But the cannabis itself is usually confiscated and holders caught in possession can suffer significant stress, even if they do not finally suffer legal consequences.

Last Week, The Times newspaper covered the case of 55 year-old MS patient Lesley Gibson. Ms Gibson’s Carlisle home was raided by police, who found eight young cannabis plants she was cultivating with a view to helping alleviate the muscle spasticity and pain that are symptoms of her condition. Prosecutors did not, in the end, present any evidence, citing a lack of public interest, and she was found not guilty. However, she had her medication confiscated and went through a year of stress and anxiety in the run-up to her trial.

Prosecuting cannabis offences, many of which are linked to medical use of the drug, costs the UK more than £2.5 billion a year. Many argue that expense brings little or no societal value as well as having a negative impact on those using the drug medically.

In terms of overall numbers, people with depression self-medicate with cannabis the most – around 650,000 in the UK. However, as a percentage of all those diagnosed as suffering from depression, that number represents less than 10%. 250,000 sufferers of chronic pain also said they used cannabis and around 183,000 said they used the drug to alleviate insomnia.

The YouGov poll’s findings have been published today as part of a report by the Centre for Medicinal Cannabis, a trade body which represents medical cannabis suppliers. The report, Left Behind — The Scale of Illegal Cannabis Use for Medicinal Intent, calls for a government review of the policies that are limiting legal access to medical cannabis. It writes:

“The monetary, ethical and social cost to individuals using cannabis to relieve their symptoms is high, and unnecessarily exposes them to significant personal risk. At present there are a limited number of appropriately sized clinical trials assessing the therapeutic value of cannabis-based medicines, reflected recently by the calls from the National Institute for Health and Care Excellence [NICE] and the National Institute for Health Research for focused research.”

The NHS wants more clinical trials that comprehensively demonstrate the efficacy of cannabis in treating different conditions before relaxing rules are prescriptions. So far, its efficacy in treating only MS and certain forms of epilepsy have been confirmed by extensive clinical trials. One major bottleneck to clinical trials is the reluctance of pharmaceuticals companies to invest in them because the cannabis plant cannot be patented, making it difficult to commercially protect treatments, unless they combine cannabis with other compounds.

The Department of Health responded to the YouGov poll and report with:

“We sympathise with those dealing with challenging conditions and have changed the law to allow patient access to cannabis-based products for medicinal use where clinically appropriate. There is a clear need for more evidence to support clinical prescribing.”

Natural gas prices have rocketed with Russia accused of managing supply to drive up... END_OF_DOCUMENT_TOKEN_TO_BE_REPLACED

After their valuations boomed in 2020, the UK’s online fast-fashion giants of Asos and... END_OF_DOCUMENT_TOKEN_TO_BE_REPLACED

The dust has almost settled on the months-long takeover battle between U.S.-based private equity... END_OF_DOCUMENT_TOKEN_TO_BE_REPLACED