A new technology being tested in Utah could improve big-rig safety and fuel efficiency on roadways.

The Utah Department of Transportation Friday coordinated field tests of a new vehicle-to-vehicle communication system targeted at the trucking industry. The department, along with California-based Peloton Technology — the company developing the system — demonstrated the automated platform using two semitrailers traveling on I-80 in Tooele County.

The system allowed the trucks to “platoon” together, similar to drafting on a bicycle or as race cars do in NASCAR. The two trucks connect within about 40 feet to 60 feet of each other and simultaneously brake, accelerate and react to road hazards up to 800 feet away, explained data engineering lead John Jacobs.

The technology constantly monitors travel and operational data that can result in significantly reduced driver reaction time, he said, and lower fuel costs up to 10 percent.

“We’ll have one truck driving ahead that is in complete control of the driving,” he said. “The rear vehicle uses a combination of sensors, including radar, high precision (global positioning satellites), a camera and two-way communications between the truck to get a precise idea of the location of the front truck.”

Jacobs said various pieces of data are collected and analyzed to determine the optimal driving behavior for the platoon. The system also utilizes radar-based active braking systems, along with sophisticated vehicle control algorithms to link the trucks.

“The driver is always in complete control of the steering,” he said. “It’s semi-autonomous.”

The safety systems are always active, and when the trucks are out on the open road, the system controls braking and acceleration, similar to adaptive cruise control with drivers remaining fully engaged, he said.

The reduction in aerodynamic drag in the platoons provides higher fuel economy for both the rear and lead trucks, Jacobs said. Preliminary testing showed up to a 10 percent savings for the rear vehicle and about 5 percent for the lead truck.

Also, a real-time video link allows the rear driver to see the road ahead of the platoon, while the lead driver has the view that is seen by the rear vehicle, explained Peloton product manager Matt Carroll.

The data flowing from the trucks allows increased levels of diagnostic information, while promoting safer driving and stronger fleet management, he added.

Currently, the technology is being tested in trials with various companies and agencies nationwide, said Peoloton founder Steve Boyd. While the system is designed heavily toward safety, the lower fuel costs provide bottom-line savings for large fleet operators, he noted.

Long-haul fleets spend about 40 percent of their operating expenses on fuel, he said. This technology could save companies millions of dollars annually and reduce carbon emissions. 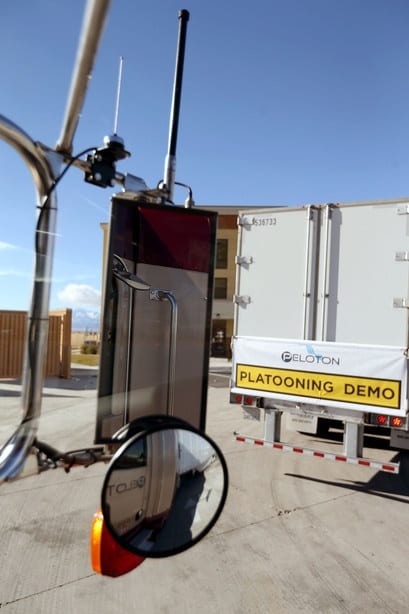 “We’re aiming that the systems may come in at about $2,000 per truck,” Boyd explained. “The return on investment could be paid off in less than one year.”

He said the system is expected to be in limited fleet use next year, with wider usage scheduled for 2017.

Earlier this year, the Utah Legislature passed a bill that allows testing of connected vehicles on nonurban interstates. UDOT said such advanced systems are promoting “a transformational shift” in transportation.

“(This kind of system) is just helping to move the entire technological front forward,” said UDOT program manager Blaine Leonard. “There is the safety issue — of making sure that as we increase how much freight is moving on our highways, systems like this can help prevent crashes and be safer (overall).”

This NASA Technology Will Help Fight Wildfires from Space

Does Big Tech’s Pile Of Cash Mean A...

Why Europe’s Corporations Have Been Left Behind By...

Google In Talks With U.S. Banks On Move...