Anglo American’s proposed takeover bid of Sirius Minerals, the company behind the Woodsmith polyhalite fertiliser mine near Whitby in the North York Moors National Park, has taken a fresh turn. Hedge fund manager Crispin Odey, who runs Odey Asset Management, and has built up a reputation as a ruthless operator, has this week built up a 1.29% stake in Sirius, mainly through contracts for difference.

He wants Anglo to up its current 5.5p-a-share, £405 million bid for Sirius, claiming that it does not represent fair value for the company’s shareholders, many of whom are retail investors who bought in at up to 40p a share. In a letter sent to both Anglo American CEO Mark Cutifani and Sirius chief Chris Fraser, Odey Asset Management labelled the current offer price “unjust”. 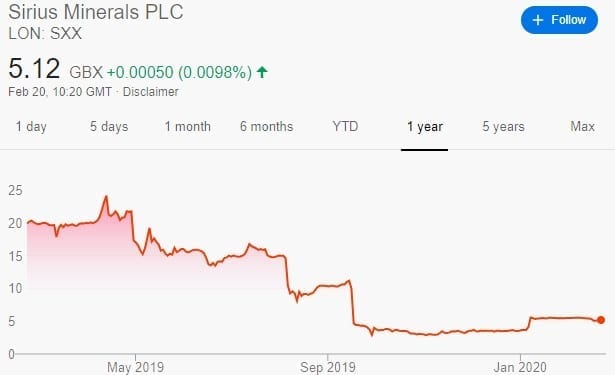 Crispin Odey is not the kind of investor usually associated as a champion of small, retail investors. A donor to the Conservative Party and avowed Brexiteer, Odey landed a windfall by shorting the pound over the 2016 Brexit referendum.

The letter demanding Anglo up its bid was crafted by Henry Steel, best known for his acrimonious exit from Rio Tinto, another miner. Odey Asset Management is currently, presumably on the advice of Steel, heavily shorting Rio Tinto’s Canadian-listed vehicle Turquoise Hill. Turquoise holds Rio Tinto’s stake in the Oyu Tolgoi mine project in Mongolia that Steel clearly believes is in trouble.

But here, Odey is painting himself as representing the interests of the some 85,000 retail investors that hold half of Sirius’s stock. Many of them are up in arms at Sirius CEO Fraser for recommending the Anglo bid, having failed to secure funding to complete the next stage of the Woodsmith mine’s development. Disaffected retail investors have gone as far as stating that they plan to vote against the Anglo bid on March 3rd to spite Fraser, even if the result is Sirius falling into bankruptcy.

It is unusual for retail investors to hold as much voting clout as is the case with Sirius and it is clearly a factor Odey believes it can play on. Mr Fraser has warned investors that rejecting the bid runs a real risk of bankruptcy wiping out shareholders. Anglo could then potentially pick up the mine even more cheaply by taking it out of administration. Mr Cutifani has insisted he will not be raising his bid.

But Odey is not convinced and hopes its brinksmanship will drag out a better offer. If the hedge fund can convince another investor, Polygon, which has also built a 9.83% stake through CFDs is proffered as the most obvious example, as well as giving retail investors the confidence to vote down the current bid, Anglo and Sirius will be in trouble.

If Anglo sticks to its guns and refuses to increase its bid to the 7p-a-share level Odey is demanding, shareholders would lose out with their equity in a bankrupt entity worthless. But the bet is Mr Cutifani and Anglo will prefer to avoid the loss of time, mess and potential for rival bidders to enter the mix, of buying the business from its administrators.

With less than two weeks to go until the March 3rd vote, there could be further twists and turns in this story.

Days Of Fraud Allegations End With Resignation Of...

Spot gold dropped to $1,904.21 per ounce, after it hit its lowest level since... END_OF_DOCUMENT_TOKEN_TO_BE_REPLACED