Next has been one of the few traditional bricks-and-mortar fashion retailers to thrive over the pandemic-blighted past year thanks to the company’s foresight and success in investing in its ecommerce operation in recent years. Online sales have boomed, picking up the slack from physical stores being closed during lockdown periods and footfall significantly down on that of normal conditions during periods they have been able to open for business.

Next’s ability to not only cope with lockdown but grow sales overall as a result of its online success saw its share price hit record highs of slightly over £80 in mid-January. Despite a dip back to £75.90 since, Next has found itself in a stronger position than ever as traditional high street rivals like the Arcadia Group brands of TopShop, TopMan and Dorothy Perkins have collapsed or are in trouble. 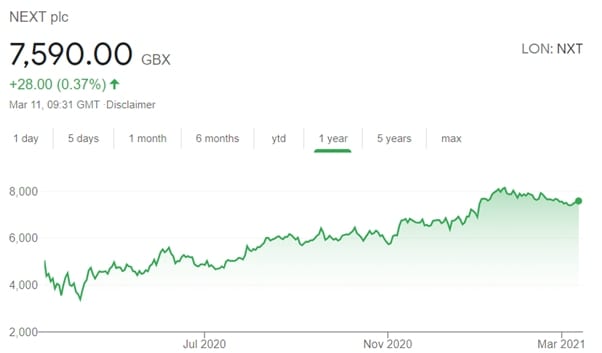 Next has now capitalised on that position of strength by acquiring a 25% stake in upmarket fashion retail Reiss for just £33 million. Next also have an option to acquire a further 26% of the company. If it takes that option up, Next will hold a majority stake in Reiss, which it is also extending a £10 million loan to. The loan is designed to ensure Reiss comes out of lockdown in a solid financial position and able to push forward again.

Until the Covid-19 pandemic hit, Reiss had been in the midst of a revival led by former Next executive Christos Angelides. The 58-year-old spend 28 years with Next, where he was widely regarded as the right-hand man of chief executive Lord Wolfson of Aspley Guise. Next taking a significant minority ownership stake in Reiss, which could become a majority stake, reunites the pair.

The close professional relationship between Mr Angelides and Lord Wolfson presumably helped pave the way to the tie-up. But Next’s motivation is also closely tied to its ongoing strategy of continuing to grow and strengthen its online business.

The deal agreed between Next and Reiss values the latter at around £200 million, including debt. Next, however, has said the FTSE 100 did not recognise that valuation. Reiss is currently owned by private equity firm Warburg Pincus, who acquired it for £230 million in 2016. Before the pandemic struck Pincus had started the process of trying to sell the business.

Discussions with Next, said Angelides, have been taking place for the past year now. He is enthusiastic on the added value Wolfson will bring to Reiss, describing him as “one of the best, if not the best, in the business”.

Angelides is also convinced the two retailers are a good match when it comes to company culture. The hope is that will smooth the way to a productive tie-up over the long term. He said:

“The cultures within Next and Reiss are very similar, which isn’t surprising given my past, so I think we can just get on with it. Reiss has the potential to be a much bigger business and brand.”

Reiss’s history goes back as far as 1971, when founder David Reiss, who still holds a minority stake in the business, established it as a ‘gentleman’s outfitters’. It currently runs 79 stores and 104 concessions. Sales were up 22% to £227.4 million over the 12 months to the end of February 2020.

Reiss is best known for its formal and special occasions wear but launched more casual lines during the course of the pandemic. While online sales have seen strong growth, that wasn’t enough to compensate for the drastic drop-off in in-store sales over the past year. Next’s Wolfson believes the company’s online offering can be strengthened further by knowledge and technology-exchange with Next but that brand and business, pandemic travails aside, has huge potential, stating.

“Reiss is an outstanding brand with enormous potential and a first-class management team. We are excited to see what can be achieved through the combination of Reiss’s exceptional product, marketing and brand building skills with Next’s total platform infrastructure.”

Reiss’ online operations will move to Next’s total platform division, which will take over the running of the brand’s website and provide the call centres, warehouse and delivery and returns logistics for the brand’s ecommerce business.

The Reiss deal represents Next’s first significant acquisition since buying Lipsy in 2008, when it again took advantage of an economic downturn and tough trading conditions. However, it last year also established a joint venture with L Brands, having acquired the UK license to lingerie brand Victoria’s Secret. It recently lost out to Asos in the bidding to bring Topshop out of administration.

With most of the strong data and positive vaccine news now priced in, the... END_OF_DOCUMENT_TOKEN_TO_BE_REPLACED

The profit-taking behaviour was also observed in the trading activity as daily trading volumes... END_OF_DOCUMENT_TOKEN_TO_BE_REPLACED