The Next share price has added a little over 1% today to take total gains for the year to 16% after the fashion retailer raised its full year forecast after better than expected sales over recent weeks. That adds to a 7.5% surge yesterday after the announcement was made to investors.

A combination of pent-up demand due to physical stores being closed for long periods over the past 15 months and hot summer weather saw sales for the past 11 weeks rise by 18.6% compared to the same period two years ago. 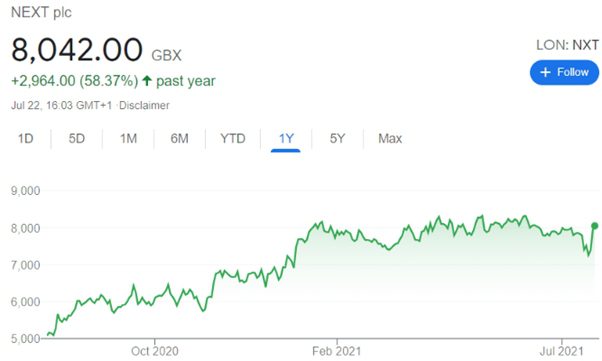 That was significantly better than analyst expectations for a 3% rise and led to Next raising its full year guidance for profit before tax by £30 million to £750 million. The company also now expects sales over the second half to rise by 6% instead of 3%.

Next’s statement to shareholders added a note of caution around ongoing sales maintaining their recent surge but was generally still positive:

“We do not expect sales to continue at these exceptionally strong levels but we are more optimistic about the outlook than we were three months ago.”

The company, often considered a bellwether for the fashion sector and consumer retail more broadly, has chosen to compare results with those of 2019 rather than last year’s as it believes they provide a more meaningful indicator of overall performance with 2020 blighted by the Covid-19 pandemic. Sales over the same period last year were down 52% on those of 2019.

Next has 498 shops around the UK but also has a very strong online presence, which saw it cope better with pandemic conditions than most high street rivals. Summer clothing sales were poor last year but consumers who have held off of purchases for much of the past year and a half are now spending some of the billions in extra savings British households have built up over the pandemic, when spending opportunities were limited. Gross household savings have increased by £139 billion to £238 billion from £99 billion in 2019.

Next also believes the lifting of some travel restrictions meaning overseas holiday can go ahead this summer has increased demand for summerwear, as well as the extended period of sunny weather in late May and early June. Homeware, childrenswear and e-commerce also all performed well. The company will return £29 million in rates relief awarded over the pandemic.

UBS analysts wrote in a note to investors:

“Our recent conversations with investors suggest a guidance upgrade and an announcement regarding a special dividend were largely expected but the magnitude of the upgrade and higher exit rate and should be taken well.”