The Next share price gained 4.1% yesterday after the fashion retailer raised its profit forecasts for the year after a strong period for online sales and out-of-town stores performing better than expected. Now trading at £64.26, the company’s share price has recovered to within almost 10% of its January high for the year.

Next’s share price plunged in March along with the rest of the market as investors panicked over the impact of the escalating coronavirus crisis. The fashion retailer struck a downbeat tone in April when it told investors the pandemic could see its 2020 sales slump by £1.6 billion compared to what had been expected.

In July, despite online sales picking up some of the slack caused by shops being shut down for months and lower consumer footfall when they reopened, expectations were still being dampened with a pre-tax profit forecast of £195 million. Another 2 months on and that’s been bumped up to £300 million, with Next proving itself to be one of the high street’s most resilient fixtures. 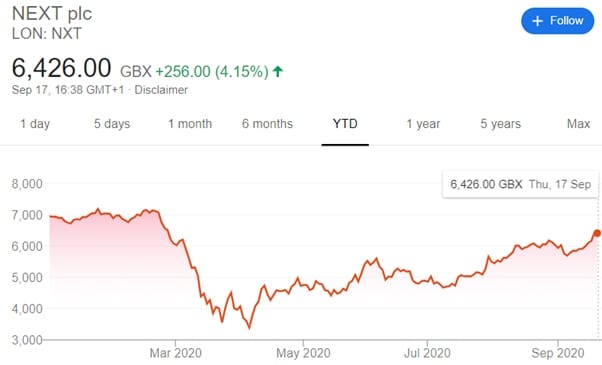 Next’s chief executive, dramatically named Lord Wolfson of Aspley Guise, yesterday allowed himself some cheer when describing the company’s half year results as “better than we possibly could have hoped”.

He was careful to caution that full year sales would still be hit in 2020, with expectations for a contraction of around 12% compared to last year and that the Covid-19 period has been an “expensive and miserable time”. But despite the strong dash of realism and care not to be seen as boasting of success where others have struggled, the message to Next’s investors was undoubtedly a positive one, under the circumstances.

New restrictions being brought into place in an attempt to combat a full-on second wave of Covid-19 in the UK are a worry for the all-important festive period that is quickly approaching as we move into autumn. Lord Wolfson said he expects the new “rule of six”, to depress consumer spending this Christmas because people “give more gifts when they see each other”.

But over the past 13 weeks Next’s sales came in at only 2% lower than for the same period last year. Consumers unable to go on holiday may have diverted funds to treating themselves to some new clothes and a cool snap is thought to have brought forward the buying of more autumnal clothes. Lord Wolfston again did his best to temper optimism, saying “I don’t want people to think that the 2 per cent sales decline will carry on.”

He continued that he realised his caution might sound pessimistic but that he was concerned the government having to end the furlough scheme will result in “economic discomfort” for many buyers and the risk of colder winter weather worsening the pandemic.

Next’s pre-tax profits over the first half of its fiscal year to the end of July were down 97% to £9 million, from £320 million a year earlier. Taking just bricks and mortar stores, a £56 million profit over the first six months of 2019 turned into a £175 million loss this year as store closures led to a 61% fall in sales. Online business dropped just 14% over the same period.

Next said that loungewear, children’s clothing and homewares were its best performing categories over the course of the pandemic. Stores in out-of-town retail parks also faired better than those in malls or on the high street, with customer numbers down just 13% over the period. Other stores were down by over a third. The company has successfully negotiated 50% rent reductions across 60 stores and 18 lease renewals have been linked to turnover, protecting the company from future shocks.

GameStop, the video games retailer that has this year found itself at the centre... END_OF_DOCUMENT_TOKEN_TO_BE_REPLACED

Investors in the online fashion retailer Asos may well be hoping the company’s share... END_OF_DOCUMENT_TOKEN_TO_BE_REPLACED

In another indication that it will take more than a tweaking of the City’s... END_OF_DOCUMENT_TOKEN_TO_BE_REPLACED