The Next share price has extended its 2022 losses today with a drop of almost 3% after the fashion retailer’s boss lowered profit expectations for the year and warned consumers that prices will rise. The cautious note that referenced an “increasingly uncertain world” put a damper on a set of outstanding 2021 results that blew away analyst forecasts thanks to impressive online sales and pent-up demand from shoppers held back by the pandemic for over a year. 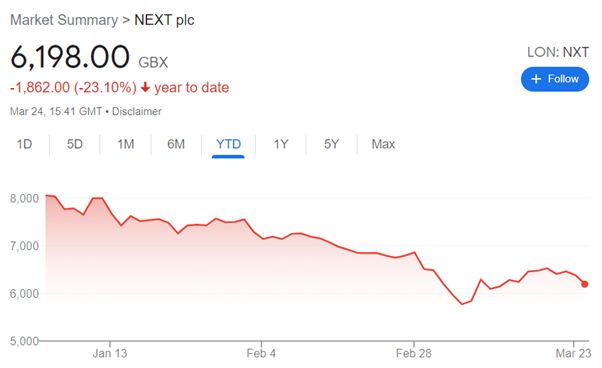 Next, which was founded in 1982, has over 500 stores selling its own-brand products as well as an ecommerce business that also sells lines from a growing range of third-party brands from Tommy Hilfiger to Joules. The company employs around 21,600 staff.

Next’s chief executive Lord Wolfson of Aspley Guise, pinpointed five areas of uncertainty the fashion retailer will contend with this year including how much of the savings built up over the pandemic shoppers still have, more discretionary spending being allocated to travel and leisure again, inflation in essential goods eroding discretionary budgets, tax hikes and its own prices being forced up.

Next also had online businesses in Ukraine and Russia that have been closed as a result of the war between the two countries and which brought in £18 million last year.

Despite expectations for stronger in-store UK sales this year, Next has revised its central profit guidance down by £10 million to £850 million. That would still be 3.3% up on the year to the end of January. Guidance for full-price sales has also been lowered by £85 million despite expectations for 5% growth on last year. The company expects to generate more income via its consumer credit offer as household budgets come under pressure from inflation.

Inflationary pressures are expected to see prices of Next’s products rise by around 8% this year compared to expectations for 6% given in January. First half prices are expected to rise by 3.7% with inflation doubling in the second half when fashion lines are expected to become 6.5% more expensive and homeware products go up 13%.

Next is well known for its detailed analysis of inflationary pressures and told investors it forecasts £143 million in cost increases. £20 million of that will come from energy costs, £55 million from wage inflation and £6 million from the resumption of employees travelling on business. However, £79 million will be gained from a reduction in internal costs which rose during the pandemic, price hikes and lower staff incentives.

“It is important to understand that the cost-of-living crisis is a supply-side crisis: the inflation we are experiencing is a symptom of underlying constraints in the supply of goods.”