The share price of UK fashion retailer Next has gained 2.7% today after the company revised its outlook up for the fourth time this year. A new surge in recent sales both in-store and online is behind the more optimistic forward guidance and has been attributed by Next to pent-up demand as consumers return to the high street as the Covid-19 pandemic moves into a less restrictive phase thanks to vaccination roll-out.

Next now expects both turnover and profits to come in ahead of pre-pandemic levels. The FTSE 100 fashion retailer expects pre-tax profits for the year to reach £800 million which is a £100 million upgrade on its previous update, itself an upwards revision. If that figure is reached it will also mean profit growth of 6.9% on the company’s last full year before the Covid-19 pandemic struck in early 2020. Total sales are expected to come in at 10% higher than in 2019. 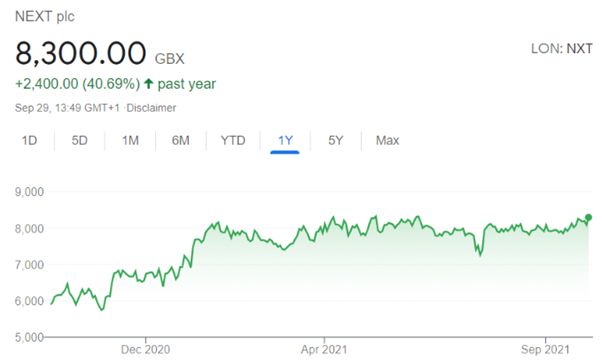 Next’s booming online business has helped the fashion retailer thrive over the pandemic period and come out stronger, going some way to compensating for the loss of in-store footfall and sales during lockdown periods.

While delivering the positive update, Next chief executive Lord Wolfson of Aspley Guise quoted the Second World War hero General William Slim, credited with snatching victory from the jaws of defeat in Burma. General Slim is credited with making the observation “in battle nothing is ever as good or as bad as the first excited reports would have it”.

“As it turned out”, remarked Lord Wolfson, “our gloomiest projections, made at the nadir of the crisis were a long way off the mark”.

Next has seen its number of online customers grow 40% over the past two years to 8.4 million. The growth is attributed to a combination of the forced move online while stores were shut but also investment made in its technology team, which has grown to more than 1000 people with the addition of new marketing, software development and data science specialists.

The company expects to invest £104 million more this year in its IT systems and online operations and another £338 million over the next three years.

Despite the strong performance of its online operation, Next estimates it still lost £250 million in sales and £86 million in profit over lockdown periods during which its stores were forced to shut. That, however, raises the prospect of a very optimistic period ahead as new online strength bolsters in-store performance no longer being crippled by store closures.

Wolfson did, however, draw attention to the risk posed by the supply chain disruptions and shortages that have plagued the UK economy in recent months. He said the company’s inventory is being affected and, at 12% lower than two years, is currently “far from optimal”, and being felt in some sales categories.

He also told investors and customers the expectation is for price increases averaging out at 2.5% across product lines due to higher shipping costs. Those price hikes will disproportionately hit homeware lines, expected to rise in cost by 6%, compared to just 1% for clothing.

And he didn’t let the UK government off the hook for the HGV driver shortage that has resulted in the ongoing fuel crisis which poses a risk to Next in the immediate term. He noted the problem “was foreseen and widely predicted for many months”, continuing:

“For the sake of the wider UK economy, we hope that the government will take a more decisive approach to the looming skills crisis in warehouses, restaurants, hotels, care homes, and many seasonal industries. A demand-led approach to ensuring the country has the skills it needs is now vital.”