Northern Rock’s Bank of England bailout ‘should have been secret

“My advice was very clear – we should not reveal publicly the fact we were going to lend to Northern Rock.”

A Northern Rock insider told the programme the bank wanted to keep the liquidity support facility secret but was told it was “illegal”. 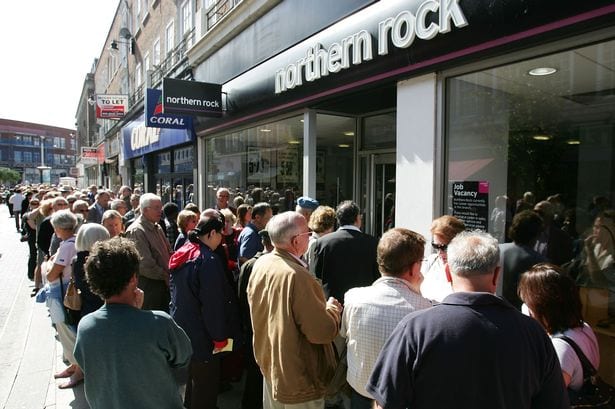 “Northern Rock and the Financial Services Authority (FSA) all felt it would be a good idea to reveal it.

“The advice of the lawyers and FSA was [keeping the deal secret] was against a European directive.

“Actually, none of my colleagues in Europe believed that for a minute.”

The news of the Northern Rock loan was broken by Robert Peston, then the BBC’s business editor on the News at Ten which led many customers to withdraw their money, resulting in a 30% drop in the value of Northern Rock shares. The bank was then nationalised and the process caused loss of thousands of pounds worth of shares for the bank’s staff and customers. The bank was taken over by the government in January 2008 but sold to Virgin money after four years.

“Under the rules, the moment Northern Rock requests emergency help from the Bank of England in that way it has failed.

“That is an event.

“If I had not reported that event I would have been guilty of playing God in an incredibly patronising way.

“I’d have been effectively saying that adults were not capable of understanding the significant information and that would have been an appalling thing for any journalist to do.”

Mr King said Mr Peston reported the story in a “very responsible way” and could not be blamed for the consequences. He said he wanted a fair deal for Northern Rock shareholders under which the shareholders would have got the “residual value” of the shares when the government took over. But they got nothing as the government concluded that the bank was not a big concern. Campaigners are now demanding compensation.