Ocado, the British technology company that started life as an online groceries shopping platform before evolving into a warehouse automation technologies specialist, is to raise a fresh £500 million capital injection. The funds are earmarked to finance the construction of tens of automated warehouse facilities around the world.

The cash will be raised by a new debt issue comprised of 6-year convertible bonds offering a modest coupon of between 0.75% and 1.25%. However, the sweetener for potential investors will be that the bonds will convert to equity if Ocado’s share price gains between 40% and 45% before they mature.

Despite the fact that the debt issue is for positive reasons and should fuel growth, the threat that the convertible bonds may end up diluting the holdings of current shareholders saw Ocado’s share price drop by 5.3% yesterday by the close of market. The slide wiped out much of the gains recorded on Friday on news that the company has agreed a deal with Aeon,Japan’s largest supermarket chain. 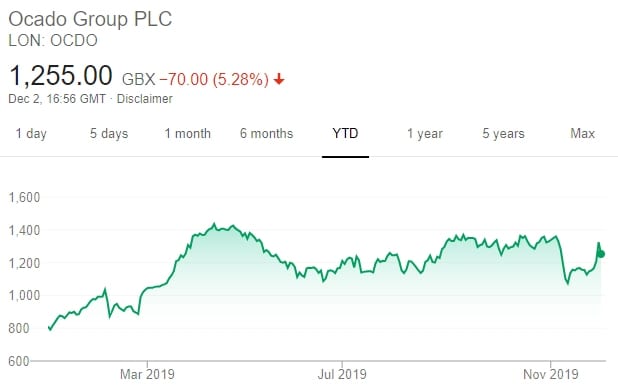 Ocado is now close to twenty years old, having been founded back in 2000 by three former Goldman Sachs traders as the UK’s first online groceries order and delivery service. It became a public company a decade later, using the investment generated through its IPO to invest in developing robotic and AI-based warehouse automation technology. While Ocado still operates its online groceries service in the UK, recently switching partners from Waitrose to M&S, it is now the warehouse automation technology side of the business that is driving growth and where its future lies.

Over the past couple of years Ocado has grown significantly on the back of deals with major international supermarket chains to license its technology. Agreements include contracts with Kroger, the USA’s second largest supermarket chain and France’s Groupe Casino. Those deals have seen Ocado triple in value to almost £9 billion over the past two years. It is now a stable component of the FTSE 100 index of the one hundred largest companies by market capitalisation on the London Stock Exchange.

Only one of Ocado’s original co-founders remains with the company – CEO Tim Steiner. Relationships between the three have soured over the years, culminating in a drawn out and contentious legal dispute with one over accusations of corporate espionage.

Ocado’s move to dump its long standing partnership with Waitrose in favour of M&S when the contract between the two companies ended provided a £750 million cash boost, which has further funded the company’s move into robotics and distribution centre technology designed specifically for food retailers. Contracts are now in place for the development of over 30 fulfilment centres, each of which costs Ocado around £30 million in upfront expenses to build.

Ocado released a statement along with the announcement on the new deal with Japan’s Aeon, telling markets that while it has no “immediate need” to raise fresh capital, it would take advantage of currently attractive bond market conditions to “diversify funding sources”.

The Japanese supermarket chain has over 20,000 stores across 14 countries, around 2500 of which are located in its domestic market. Its stores service over 100 million customers. Ocado’s first fulfilment centres for Aeon will be used to service the greater Tokyo and wider Kanto region of Japan. The deal will see Ocado meet costs of around £25 million next year to build the distribution centres. The usual model under which it operates is for it to cover the costs of installing robotics and software, while the client picks up the bill for the warehouse premises themselves. How many warehouses are to be initially built for Aeon has not been disclosed.

Japan is a particularly promising market for automation technology due to a shrinking population meaning there is a labour shortage for low-skilled jobs. The online groceries market is also particularly suited to automation as an ageing population means lower average basket values than in the UK, where Ocado’s average order is £106. Lower value orders mean additional cost pressures which can make paying the salaries of numerous warehouse workers a non-viable business model. United Nations forecasts expect the size of Japan’s labour force to drop by 24 million by 2050 – a faster drop than expected for the overall population and a result of an increasing average age.