Online groceries and warehouse robotics specialist Ocado yesterday reported a 52% rise in sales. The sales boost came over the 13-week period to the end of August but there may be even better to come with the FTSE 100 company telling investors that its new partnership with M&S, which came into effect as of September 1st and replaced a prior tie-up with Waitrose, has gotten off to a flying start.

The partnership is important to Ocado’s online deliveries arm, which has now been superseded in its importance by it warehouse robotics unit, but even more crucial to M&S. The supermarket recently signed a £750 million joint venture agreement with Ocado and with its clothing and home accessories businesses struggling, it could do with some good news on food and groceries.

The first couple of weeks of the partnership have at least shown promise, with Ocado saying that shopper “excitement” over the new partnership has led to a rise in the value of the average basket, as well as the number of goods in it. Ocado also reported that it had its biggest ever sales day ahead of the switch from Waitrose to M&S, when demand was even higher than during March when shoppers were panicked into stockpiling due to the Covid-19 pandemic.

However, the September 1 switch from Waitrose to M&S didn’t go completely smoothly with Ocado’s well-publicised capacity issues again proving a problem. There were customer complaints over orders due for delivery on September 1st being cancelled at short notice. Ocado blamed the teething problems on a “surge in demand”, but insisted only a “very tiny proportion” of orders, said to be around 1000, were cancelled. The company also informed that affected customers had been offered a money-off voucher in compensation.

Ocado is currently able to service around 350,000 orders a week but plans to extend that capacity by around 40% through the construction of three new robotics-infused warehouses in Bristol, Purfleet (Essex) and Andover (Hampshire).

Ocado fulfils its delivery orders from goods stored in warehouses rather than picking them off supermarket shelves. That’s more efficient in terms of its margins but also means capacity is relatively inelastic. It’s only managed to increase orders by 9.6% this year to cope with increased demand over the coronavirus lockdown period.

Traditional supermarkets have, by contrast, managed to more than double deliveries by ramping up click-and-collect services and hiring more staff to put together orders by taking the products of the shelves in-store. Tesco is now able to deliver 1.3 million online orders a week compared to 600,000 earlier in the year.

Ocado couldn’t have been expected to anticipate the sudden surge in demand for online groceries shopping but its inability to quickly expand capacity does mean it is losing out. Outgoing chief financial officer Duncan Tatton-Brown told investors and shoppers not to expect the company to be able to “add substantial capacity this side of Christmas…we are already operating at maximum capacity”.

Founded in 2000 by three former Goldman Sachs bankers, of whom only chief executive Tim Steiner remains with the company, Ocado is no worth more than M&S, Wm Morrison and Sainburys combined, with a market capitalisation of over £20 billion. The Ocado share price leapt by 10.7% yesterday to close at £26.08 and have added another 2.5% so far today. 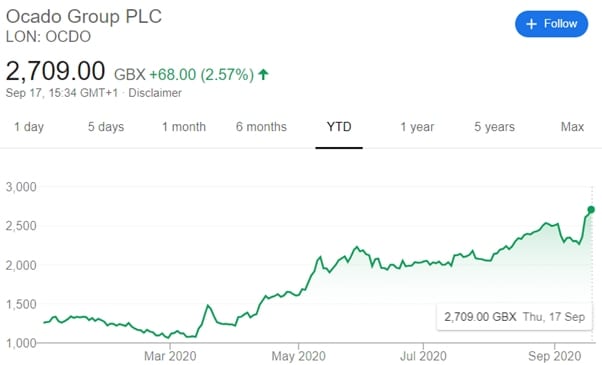 The company spent years struggling to convince investors it could make money from a purely online groceries delivery model. The breakthrough that has driven a huge surge in the company’s value this year has been its warehouse robotics business. Ocado spent years developing warehouse automation systems of robotics and software which it is now selling into major supermarket chains globally as online orders grow in popularity.