The Ocado share price has gained 1% today after the company last night won the latest leg of an extensive, international intellectual property dispute with Norwegian rival AutoStore. While the legal wrangle is far from concluded, with the next round set to commence in London courts next week, the International Trade Commission (ITC) yesterday ruled Ocado will not face an export ban on its warehouse robotics technology.

The ITC had opened an investigation into allegations by AutoStore, which also develops and licenses warehouse automation robotics and software, that Ocado had infringed on 33 of its patents. However, the investigation concluded with a ruling the patents were either not infringed by Ocado or invalid. 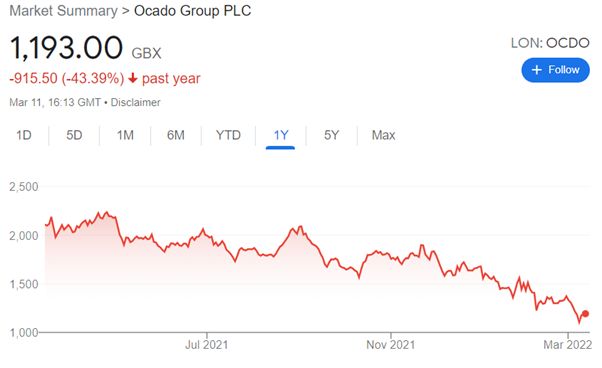 A U.S. import ban of its technology would have been a major blow for Ocado, whose valuation is now largely based on the future revenue potential of it licensing its automated warehouse tech to international retail partners. It has already built and fully kitted out two logistics centres for Kroger, the second largest supermarket chain in the USA after Walmart, with several more contracted.

While Ocado’s valuation ticked up this morning, opening up to a gain of 1.69%, AutoStore opened the trading day to a near 2% decline. Its claim against Ocado is that the London-listed company that was originally an online groceries shopping and home delivery service and still has a significant B2C business in the UK, illegally infringed on its approach of using a grid system for warehouse robotics.

Ocado’s defence team compared the claims of patent infringement to Ford trying to sue Tesla because the company also makes cars. Ultimately, the ITC agreed. Ocado has countered by suing AutoStore for infringing on its patents. It says it owns around 750.

Ocado was founded in 2000 by three ex-Goldman Sachs bankers and was for many years among the most shorted stocks on the London Stock Exchange as it struggled to turn a profit on its low margin groceries deliveries business.

While that has survived and is doing well through a new partnership with M&S that last year replaced a long standing cooperation with Waitrose, the company’s potential is seen as now more closely tied to its technology business. It now has ten international deals with retailers including Kroger and France’s Casino.

The company commented on yesterday’s ruling with:

“The ITC investigation is now at its end and AutoStore’s key cavity bot patents, the UK versions of which are the only patents being asserted against Ocado in the high court case starting next week, were all found to be invalid. A fourth, unrelated, patent was held not to be infringed.”

AutoStore, however, is not giving up and said it will appeal the ruling to the US Court of Appeals. Analysts such as Berntein’s William Woods, who called the decision “a big win for Ocado as the U.S. is its biggest market” and that it should “be seen as a positive”, appear to think the Norwegian company’s chances of success are now slim.

The London case due to commence in the UK High Court next Tuesday will focus on three patents held by AutoStore known as the “central cavity patents”. They detail how the robots used on both grid systems can hold and transport crates of goods inside themselves.

“We expect further vindication in the High Court in London in the weeks ahead, where AutoStore has already abandoned half of the patents in the case.”