The Ocado share price dropped by almost 4% today despite a raft of positive results being reported today and the announcement of a new technology deal with Spanish supermarket chain Auchan. However, it appears a slowdown in the growth of sales by the British technology company’s retail business from 40% last year to 19.8% this year disappointed some investors.

The period being reported on was the 25 weeks ending May 30th, during which time the business sold £1.4 billion of groceries through its joint venture with Marks & Spencer. Despite the fact growth failed to match or improve on the rate over the same period a year ago, Ocado chief executive Tim Steiner told investors he believes the accelerated move to online shopping since the start of the coronavirus pandemic is a permanent one. 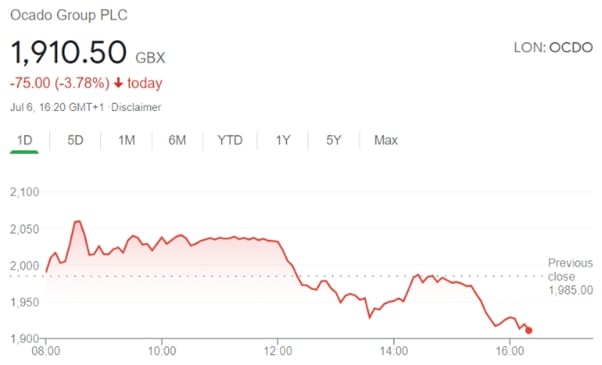 Basket sizes of those shopping with Ocado have shrunk compared to last year, to a value of around £138, since restaurants and bars reopened. However, they are still larger than a year ago.

One big reason Ocado’s retail business has failed to maintain its rate of growth from a year earlier is capacity. Because Ocado’s fulfilment centres are highly automated by the technology business’s proprietary warehouse robotics systems they are much more expensive and take longer to build than the equivalent infrastructure of rivals like Tesco.

While Ocado argue their technologically superior logistics will pay dividends in the long run it has proven a bottleneck to growth in the short term. But Steiner told investors today the company is now adding capacity and will be able to accept more orders, saying:

“We are back in customer acquisition mode, because last year we were in a peculiar mode where we had to protect the capacity for our loyal and long standing customers, and the ones the government asked us to help”.

The company said its new mini warehouse in Bristol and the rebuilding of its Andover and Purfleet sites after they were destroyed by fire will add 145,000 orders a week capacity when they reach maturity. The down side is this will take at least two years.

However, most of Ocado’s market value now comes not from its original retail-facing business but its technology arm. The company licenses its warehouse automation robotics to supermarket chains around the world, building and kitting out their logistics facilities from the ground up.

Ocado’s use of its own technology in its retail business saw the unit’s earnings rise 127.8% to £104.1 million. A much better profit margin than that achieved by rivals with bigger capacity and presented by Steiner as evidence of the wisdom of the long term capital investment needed to build robotic warehouses.

But despite its potential, the logistics technology side of the business is still loss-making. Overall group losses before tax dropped to £23.6 million from £40.6 million the year earlier, brought down by profits from the retail business.

The technology business is one step closer to profitability after a new agreement with Spain’s Auchan Retail was announced. Ocado will help the Spanish retailer develop its Alcampo brand online and the partnership becomes its tenth international deal. Auchan has supermarket businesses in 13 countries, which Steiner said he was hopeful “may open up other opportunities”.

Having raised £1 billion from investors last April to invest in expansion Ocado says its liquidity position is strong.

2020 was a disaster for income investors as the onset of the coronavirus crisis... END_OF_DOCUMENT_TOKEN_TO_BE_REPLACED

With gains of 21% since the beginning of the year, commodities has been the... END_OF_DOCUMENT_TOKEN_TO_BE_REPLACED

The London-listed mining company Rio Tinto has just announced it will pay out record... END_OF_DOCUMENT_TOKEN_TO_BE_REPLACED

Since he founded it as an online bookseller from the garage of his rented... END_OF_DOCUMENT_TOKEN_TO_BE_REPLACED

Last month the board of Wm Morrison, the UK’s fourth largest supermarket chain by... END_OF_DOCUMENT_TOKEN_TO_BE_REPLACED