The share price of online groceries and warehouse robotics company Ocado has gained over 9% today on the news a judge has ruled in its favour in a patent dispute with a Norwegian rival. AutoStore had taken Ocado to court in a complaint that alleged the FTSE 100 company had infringed upon several of its patents.

AutoStore’s case was filed in both the UK and USA in October 2020 and Ocado’s response was to respond with its own legal action against AutoStore. Ocado’s accusation was that it was, in fact, AutoStore infringing its patents in the two territories. 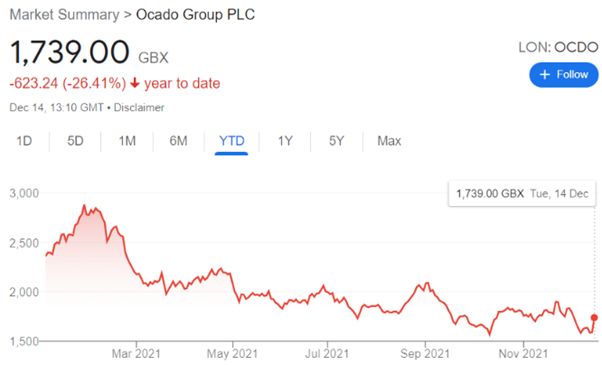 The first leg of the court battle has now been won by Ocado after an American federal agency ruled that Ocado had not violated the Norwegian robotics company’s patents. Last night, the initial ruling of the US International Trade Commission, described as “an independent quasi-judicial agency”, was that there had been “no violation” by Ocado of U.S. patent laws.

Ocado’s response to striking the first blow in the legal dispute was a terse statement accusing its Norwegian competitor of a “misconceived attempt” to slow down its expansion into the North American market.

Ocado was founded in 2000 as the UK’s first online groceries service, partnering with the upmarket supermarket Waitrose for almost 20 years. The consumer-facing UK business is still going strong and last year entered into a new joint venture with Marks & Spencer which is going well. Ocado also delivers for Wm Morisson.

However, much of the company’s over £13 billion valuation is now tied up in its warehouse robotics business. It has licensed its technology internationally through deals with major supermarket chains Kroger, in the USA, and Coles in Australia. Ocado’s AI and robotics technology almost fully automates the warehouses out of which online groceries orders are put together and packaged for delivery.

Norway’s AutoStore is a robotics company founded in 1996. SoftBank, often referred to as the world’s biggest technology investor, owns 40% of it and other investors include the American private equity firm THL Partners. It has automated technology installed across 600 warehouses in 25 countries. Its last private valuation, when SoftBank acquired its stake in April, was $7.7 billion (£5.82 billion).

“We have consistently stated that Ocado does not infringe any valid AutoStore IP [intellectual property], and we are pleased that the judge has now agreed with us. This was a misconceived attempt by AutoStore to interfere with our business in the United States.”

“We intend vigorously to continue our infringement claims against AutoStore in the United States and Europe.”

“The initial determination found that certain of AutoStore’s patents were invalid based on a narrow legal issue. AutoStore intends to challenge the non-final decision before the full Commission, which will review the findings and is expected to issue a final determination in April 2022.”

“AutoStore believes strongly in its litigation positions and will continue to pursue them. AutoStore also continues to believe that each of the claims and counterclaims raised by Ocado is without merit and intends to vigorously defend against those claims. The outcome of legal proceedings is subject to uncertainty and can be extremely difficult to predict, and AutoStore offers no assurances in this regard.”

Despite today’s impressive gains, the Ocado share price is still down 26.4% for the year after a sharp increase in its valuation in 2020. The company’s warehouse robotics are considered market leading and offer major efficiencies for online groceries businesses. However, the capital investment and time needed to build an Ocado tech-powered warehouse compared to a more standard facility is considerable.

That meant Ocado’s B2C business in the UK wasn’t able to expand capacity as quickly as rivals such as Tesco and other supermarkets offering online orders and delivery. Two major warehouse fires in recent years also hit capacity which has now been increased by about 40% this year.