The Ocado share price has risen by almost 6% today after the Swiss bank Credit Suisse updated its previous “underperform” recommendation on the stock and said it now has “greater confidence” in the company’s prospects. The broker set a new price target of £17.50 and said it believes further downside risk is “limited” after the company’s valuation halved over the last 12 months.

The upgrade comes a week after the online groceries and warehouse automation company announced a major breakthrough in its robotics R&D which it described as “one of the most significant steps forward in technology in Ocado’s history”. 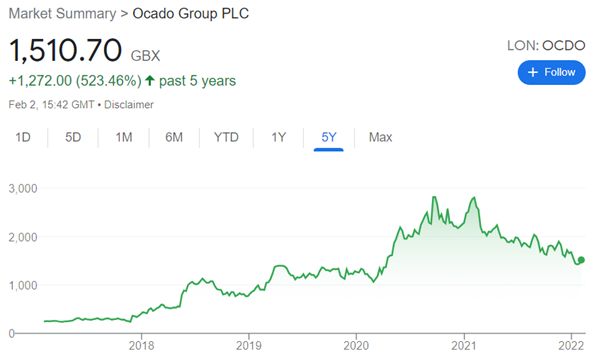 Analysts were last week briefed through a presentation entitled “Ocado Re:Imagined”, which demonstrated how lighter robots with automated arms are now able to pick groceries directly from storage grids. The new kit can also be retrofitted into existing warehouses, which Ocado said will mean it can build its licensed robotics warehouses “faster and cheaper” in future.

While Ocado started as a retail-facing online groceries delivery platform, initially partnering with Waitrose before more recently establishing a joint venture with Marks & Spencer, its focus in recent years has been to develop and license warehouse technology to international supermarkets groups.

It has deals with Kroger in the USA, second only to Walmart in market share, and Coles in Australia, among several others in an expanding business.

Ocado warehouses are organised in a metallic grid system that allows robots to criss-cross the premises and deliver products to human workers who bag them for delivery. Recent advancements in the machine vision and AI powering the robots is making the automated system even more efficient. Ocado says it can lower labour costs by 40% and eliminate the most physically demanding jobs carried out by humans.

The latest generation of Ocado robots is, says the company 80% lighter thanks to half of their components being produced by 3D printing. Lighter robots will mean significant energy savings for warehouses as well as allowing for the grids to be smaller, lighter and fitted more quickly at less expense. Retrofitting existing warehouses with the new technology will take weeks rather than the months previously required.

The new technology will also, says Ocado, allow it to work with new types customers, not just supermarkets.

The new generation of robots was informed by lessons learned at Ocado’s Erith and Andover warehouses which were destroyed by fire causing tens of millions of costs in damage and lost sales. Both fires were caused by robots colliding, damaging their batteries. That risk will be significantly reduced by the new systems and lighter robots with Steiner commenting:

“We have learnt a lot from Andover and Erith … the advancements to these robots are not focused on fire retardancy but they will slightly reduce the risk rather than increase the risk.”