Ocado Share Price Up In Morning Trading On News Of U.S. Robotics Acquisitions

The Ocado share price rose strongly in early trading this morning to gain 1.8% on news the online groceries and warehouse automation technology group has acquired to U.S. robotics companies. The deals will see Ocado expand into fashion retail logistics from its current focus on the online groceries sector, in which it has become a market leader. 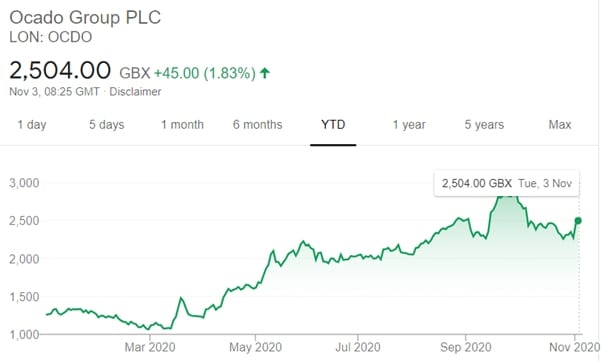 Ocado yesterday announced a $262 million deal has been struck to see it acquire San Francisco and Toronto-based Kindred Systems. The company supplies logistics robots for general retailers, with fashion companies Gap and American Eagle among its client lists. $25 million will also be spent on Las Vegas-based Haddington Dynamics, which designs robotic arms.

The deals were detailed alongside an Ocado announcement that it is raising its full-year profit before interest and other items forecast to north of £60 million. Previous guidance issued in mid-September had forecast the figure at almost 50% less – at least £40 million.

With the online retail sector one of the big winners from the Covid-19 pandemic, Ocado has likewise benefited as companies invest in their online offerings and supporting logistics infrastructure and capacity. The Ocado share price rose by as much as 8% yesterday, to £24.59.

The acquisitions mark a newly concerted effort by the company to move into general merchandising from current warehouse automation solutions focused on the groceries sector. It does currently deliver some general merchandise through its partnership with Marks and Spencer in the UK, but inventory is limited. The M&S partnership saw the food, fashion and homeware retailer acquire 50% of Ocado’s UK-based online groceries delivery retail business. Until September, Ocado had a tie-up with upmarket supermarket chain Waitrose.

However, over the past couple of years, it has been Ocado’s technology division, which licenses its warehouse automation technology stack to B2B partners, which has driven the company’s growth. It has established several new international partnerships to provide the technology and build and operate warehouses, including with U.S. chain Kroger – the country’s largest supermarket by revenue and second to only Walmart as a general retailer.

Duncan Tatton-Brown, Ocado’s chief financial officer, yesterday said the decision had been taken to raise the group’s profit guidance as a result of it becoming clear the pandemic will now drag on for longer than expected some months ago. Ocado has not increased its capacity, nor pricing. Mr Tatton-Brown commented:

“We, I think like many, wouldn’t have necessarily assumed that the conditions that we’re currently facing would have lasted this long.”

Ocado’s acquisitions of Kindred Systems and Haddington will see it acquire robotics that should help it place groceries items directly into bags; a task its current technology stack struggles with. It will also, says chief executive Tim Steiner, open up new opportunities in general merchandising:

“It will increase the likelihood of us looking at those areas more broadly than we would have done before.”

Workers in existing Ocado warehouses will not see their jobs come under threat as a result of the introduction of the new technology, though in future fewer staff will be needed to pick and back products. On the flip side, the development is expected to see an increase in the number of engineers Ocado employs.

The acquisitions of Kindred and Haddington are expected to add around £30 million to Ocado’s revenues next year and will have “a small negative impact” on earnings.

With bond yields at historical lows, they are not a particularly attractive investment for... END_OF_DOCUMENT_TOKEN_TO_BE_REPLACED

Most of the world’s investment capital is held in the stock of companies known... END_OF_DOCUMENT_TOKEN_TO_BE_REPLACED

It’s not so long ago millennials and Gen Z were being criticised for spending... END_OF_DOCUMENT_TOKEN_TO_BE_REPLACED