The Ocado share price, which had gained over 170% since its March nadir, yesterday slid for the third day in a row taking losses since Tuesday to almost 9% after news broke that the company is being sued by a Norwegian robotics company. Autostore, accuses the warehouse robotics and online groceries company of infringement of a number of its patents and is pursuing hundreds of millions of pounds in damages. 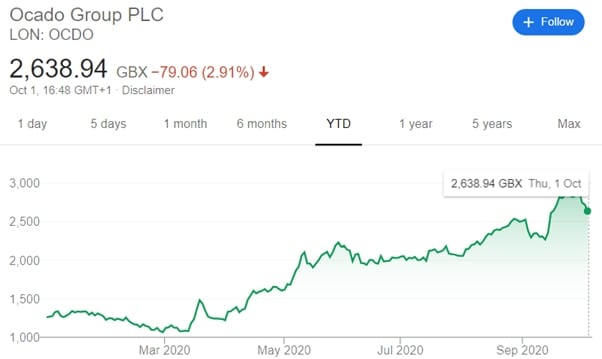 Autostore has commenced legal action at both London’s High Court and the International Trade Commission in the United States. The Scandinavian tech company wants to block Ocado from exporting its warehouse robotics based on the alleged breach of its intellectual property rights.

For its own part, Ocado released a statement insisting it was “not aware” of any grounds to the allegations and would not only defend its rights “vigorously”, but examine if there were grounds to counter-sue Autostore for violation of its own patents.

Autostore’s allegations focus on the Ocado Smart Platform warehouse robotics technology that the FTSE 100 company licenses to international supermarket chains for use in their own delivery warehouses. The platform is now Ocado’s main business, far outstripping the valuation of its own UK-based online groceries delivery operation, in partnership with Marks & Spencer. The platform operates waist-height robots which move around warehouses on a grid, picking and backing the products that form online groceries shopping orders.

It is largely thanks to the Ocado Smart Platform that the company’s share price has risen by around 1000% over the past 3 years. Having signed licensing deals with seven major international supermarket chains, including US company Kroger which is second only to Walmart on market share. A U.S. filing details that Ocado will be paid $55 million for each of the 20 warehouses it is building for Kroger. Yesterday’s announcement of Autostore’s legal action saw the Ocado share price slide by 5%.

Autostore, which was founded in 1996, is owned by THL Partners, an American private equity group that acquired it for a reported £1.5 billion. UK supermarket chain Asda, Lufthansa and electronics retailer Best Buy are among its client lists and the company’s technology is used in around 500 warehouses.

Autostore believes it is technology which it developed and has patents to that forms the basis of Ocado’s platform and that its licensing agreements are subsequently based on “continued infringement of Autostore’s intellectual property”.

“Our ownership of the technology at the heart of Ocado’s warehousing system is clear. We will not tolerate Ocado’s continued infringement of our intellectual property rights in its effort to boost its growth and attempt to transform itself into a global technology company.”