Odds do not bring down China’s trade 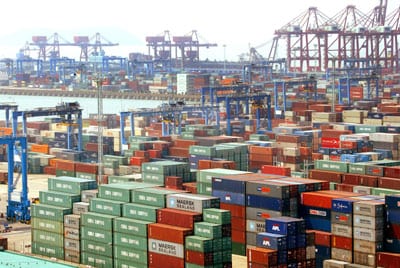 Despite very weak external demand and rising costs, China’s trade has performed comparatively well, according to an official of the Ministry of Commerce. The ministry spokesman, Shen Danyang said, “The performance is indeed an achievement given the slowing investment at home, an appreciating Yuan and rising costs of operation”.

According to the World Trade organization global trade slumped 11.1 per cent from a year earlier in the first three quarters of this year. Brazil’s trade sank 16.8 per cent, India’s fell 16.6 per cent, the European Union’s shrank 12.8 per cent, and Japan’s declined 9.2 per cent.

But China’s trade, in the first three quarters, fell only 7.9 per cent to 17.86 trillion Yuan or US$2.8 trillion. Although the figure was less than the global average, it was behind the official target of 6 per cent growth for the year.

According to a survey by the ministry involving over 6,000 traders the global demand was even less than that in 2009, at the time of global financial crisis.

But China “is set to keep its position as the world’s biggest trader, with an increasing share in global trade”, Shen said.

That the international travel sector is, thanks to the Covid-19 pandemic, in a bit... END_OF_DOCUMENT_TOKEN_TO_BE_REPLACED

With a growing number of economists arguing there is a high chance we are... END_OF_DOCUMENT_TOKEN_TO_BE_REPLACED

While most still caveat the argument with the get-out clause it is far from... END_OF_DOCUMENT_TOKEN_TO_BE_REPLACED

Natural gas prices have rocketed with Russia accused of managing supply to drive up... END_OF_DOCUMENT_TOKEN_TO_BE_REPLACED

After their valuations boomed in 2020, the UK’s online fast-fashion giants of Asos and... END_OF_DOCUMENT_TOKEN_TO_BE_REPLACED