The price of a barrel of Brend crude has risen 1.3% to around $87.62 today and predictions made for $100-a-barrel before the end of 2022. Oil prices spiked today after overnight raids launched by Saudi Arabia on the Yemeni capital Sanaa raised fears over potential supply disruptions if the regional conflict escalates. The strikes were made by Saudi Arabia in response to attacks on UAE fuel facilities by Yemeni Houthi rebels, who are backed by Iran.

Brent crude prices are now higher than those seen during October 2018, the last time oil prices spiked, and reaching levels last seen back in October 2014. Adnoc, the UAE oil company whose facilities were attacked over the weekend, has said it has activated its business continuity emergency plans and customers will not suffer supply delays after the incident. However, the Houthi rebels have issued warnings they could now target more facilities.

The impact of tensions in the Middle East on oil prices are being further compounded by concerns over a potential Russian invasion of Ukraine. That would inevitably lead to wide-ranging economic sanctions against Russia, a major oil and gas supplier. 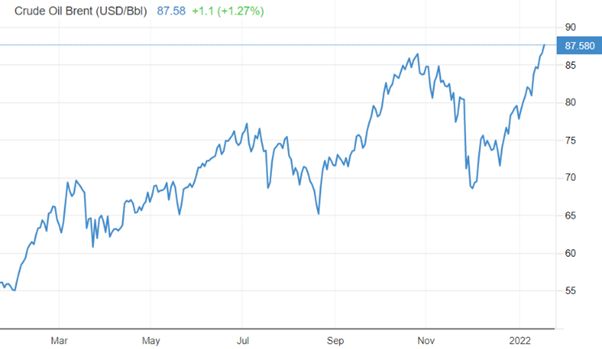 Goldman Sachs analysts have reacted to the oil price rally in place since early December last year by forecasting Brent crude will hit $100 a barrel before the end of the year. On the presumption the Omicron wave of the coronavirus pandemic won’t, in the end, lead to major economic disruption and lower oil demand, the analysts believe Brent crude will now average $96 a barrel in 2022. That could rise to $105 by early next year as global demand reaches record highs, fuelled by a post-pandemic surge in economic activity. A research note today noted oil supply remains in “a surprisingly large deficit”, due to the impact of Omicron proving less than initially anticipated.

“Both confirmed cases and hospital admissions are now on a downward trend in South Africa and in London and Boston, suggesting the impact could be largely behind us by March in advanced economies, with likely only modest hits to [emerging market] demand outside of China due to warmer temperatures, fewer lockdowns and small tourism sectors.”

Economies declaring an end to the pandemic and the beginning of the virus’s endemic stage this year would be expected to see demand for fuel hit record highs. A leap in demand for jet fuel could be particularly pronounced due to pent-up demand for travel.