You might expect a serious stock market crash and economic turmoil to be a problem for an online stock broker and funds platform serving private investors. But it turns out that hasn’t been the case. At least, not for AJ Bell, one of the UK’s largest investment platforms. The company has reported attracting a record number of new account holders over the three months to the end of March.

A total of 20,872 new customers opened accounts with AJ Bell over the first quarter of 2020, bringing in a net new £1.3 billion of funds under management despite financial markets chaos. That figure saw the company’s total account holders grow by around 8% in just three months to 248,074.

With stock markets plunging in late February and early March as investors panicked amid the onslaught of the Covid-19 pandemic, retail investors have smelled an opportunity. Obviously eager to take advantage of lower prices now, and presumed strong gains when the stock market eventually recovers, would be investors have been enthusiastically opening accounts to dip their toes into the market.

The stock market slide saw AJ Bell’s total assets under management drop by around £7.7 billion to £48.3 billion as of the end of March. However, boosted by the new money coming in from accounts recently opened, the company actually now has 1% more capital under management than it did last year, despite the hit to the value of existing accounts.

The FTSE 250 company floated on the London Stock Exchange relatively recently and has been a public company since December 2018. The Manchester-based investment platform was founded 25 years ago chief executive Andy Bell and his long time friend Nicholas Littlefair, who is an actuarial, pension and trustee administration expert. It has grown to become one of the market leading platforms for small, private investors to buy shares, funds and ISA and SIPP products through.

Valued at £651 million when it originally floated as a public company, AJ Bell’s market capitalisation has since more than doubled to almost £1.4 billion in under 18 months. The company saw its value increase by £100 million just yesterday after the AJ Bell share price surged over 15% on news of the positive quarter. 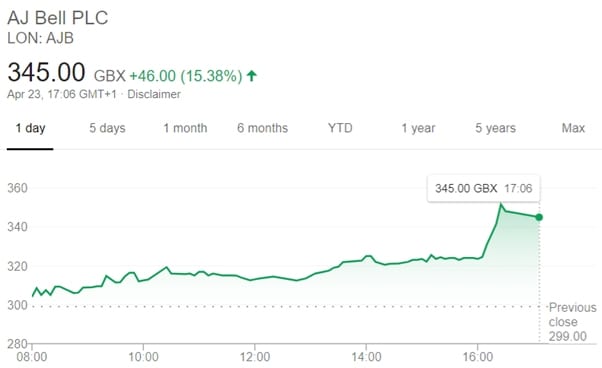 The first quarter of the year is traditionally the busiest period for AJ Bell and its peers as the end of the tax year approaches and investors rush to open ISAs and pension products to use up their annual allowance. Total customers, including private advised non-platform clients, grew to 262,179 from 241,152 at the end of 2019.

“Our forecasts had assumed that net inflows would have been impacted by a lack of investor confidence surrounding the coronavirus. This has clearly not been the case.”

Mr Bell’s statement to investors in his own company’s stock read:

“This quarter was without doubt one of the most dramatic we’ve witnessed. We had to move quickly to keep our people safe from Covid-19 and comply with the government lockdown. I’m pleased that we were able to do that effectively whilst remaining open for business as usual during a very busy tax year end period.”