Boohoo, the online fast fashion retailer whose sales have held up well throughout the ongoing Covid-19 pandemic lockdown has launched a surprise £200 million share issue. However, unlike other companies tapping investors for cash, especially those in fashion and retail, Boohoo doesn’t need to cash to survive. Instead, it would appear the plan is to capitalise on the troubles of ailing high street brands by making some bargain acquisitions.

The retailer this morning confirmed that it had sold £197.7 million of new shares through the placing at 340p a share. That represented a discount of 3.2% on last night’s closing price of 351.3p. The Boohoo share price has risen around 1.15% today to a new record high of 355.3p. 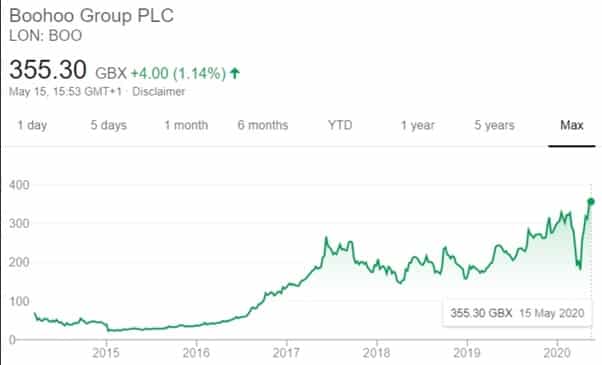 It’s only three weeks since the online retailer told investors it was sitting pretty with £240 million in cash on its balance sheet. More than enough liquidity to get it through the current crisis, and any downturn in coming months brought about by the expected lockdown hangover recession.

The move to bolster that war chest is not, like peer Asos which last month launched its own share issue, with a view to providing itself with insurance against future cash flow worries. Instead, it is designed to capitalise on the struggles of other retailers and “take advantage of numerous opportunities that are likely to emerge in the global fashion industry over the coming months”.

“We want to have the ultimate competitive position because there will be distressed businesses, which we will be able to help with our firepower.”

Boohoo has previously acquired high street brands Coast and Karen Millen as well as online fast fashion retailers Nasty Gal and MissPap. Those acquisitions were managed smoothly but Mr Catto believes that Boohoo, whose fast fashion lines target the 16 to 30-year-olds demographic, is also in a position to “integrate a larger brand if that was an opportunity that came along”.

The company’s chief executive John Lyttle emphasised that Boohoo doesn’t, yet, have any firm acquisition targets but is monitoring potential deals in Europe and the U.S., as well as in the UK. He echoed the expectation that the tough retail environment is likely to throw up the kind of opportunities that probably wouldn’t have appeared a few months ago:

“Retail is not the best place to be at the moment and we think there will be a lot of opportunities for us.”

Mr Lyttle also confirmed that even if any acquisition of a high street retailer involved real estate, the strategy would subsequently be to offload shops, maintaining Boohoo as a ‘pure-play retailer’.

Boohoo has previously been linked to troubled high street brands, specifically Oasis and Warehouse. However, those deals were not pursued and the brands ended up in the control of restructuring company Hilco, which closed all their shops. At the time, swallowing those companies may have been a financial stretch for Boohoo, but the injection of £200 million of fresh capital could mean larger transactions of a similar nature is realistic in coming months.

Boohoo is only 14 years old, having been set up in 2006 by Mahmud Kamani, 55, and Carol Kane, 53, who previously worked together supplying retailers, including Primark and New Look. Still listed on the LSE’s sub AIM exchange for smaller growth companies, Boohoo’s market capitalisation is currently around £4.1 billion valuation – more than double that of Marks & Spencer.

Opportunity For Quick Profits On Investment Properties While Market Recovers From Covid-19 Pandemic?