One year on from its IPO and debut as one of the publically listed companies it allows retail investors to buy shares in through its online stock broking and investment platform, AJ Bell has posted record profits. One of the UK’s biggest investment platforms by market share, AJ Bell saw its pre-tax profits rise by 33% to £37.7 million over the 12 months ending on September 30th.  Revenues over the period were up 17% to £104.9 million.

Early investors in the AJ Bell stock will have made strong returns since the float late last year. The company’s share price has risen from 220p to 395.5p over the period – an almost 80% increase. That rises to gains of just under 148% for investors who bought in at the IPO price of 160p. 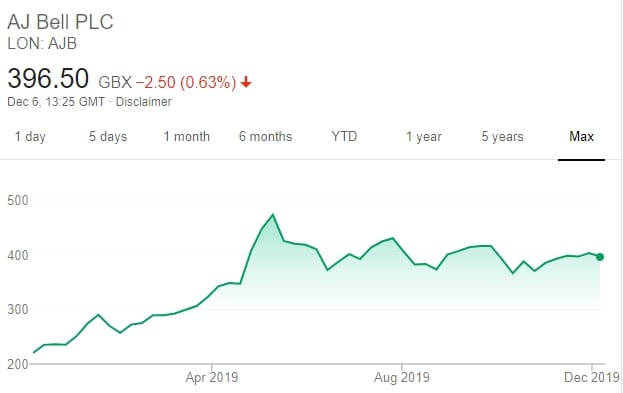 Chief executive and co-founder Andy Bell commented on the positive full-year report with:

“These results are a strong endorsement of the business model and growth strategy that we outlined in the run-up to our IPO a year ago. The structural growth drivers for investment platforms in the UK remain strong.”

Mr Bell was an actuary by profession before setting up AJ Bell in 1995 with friend Nicholas Littlefair. The Manchester-based business was originally a pension, trustee and actuarial admin business before pivoting to become a digital investment platform. He still owns around 24% of a company that is now one of the UK’s biggest D2C investment platforms.

The company announced with its results that it plans to donate around £10 million to charitable causes. The donation will take the form of a new share option plan and will be made on the condition the AJ Bell share price rises by at least 100% over the next three years and 150% over the next five. The share options earmarked for the charitable donation will be held by the AJ Bell Trust charity set up by Mr Bell. Its core mission is to help disadvantaged youth in the UK. However, the £10 million donation will be divided between causes to be voted on by the online stock broker’s staff and customers. If the share price targets are not met, the donation will still be made, with Mr Bell himself personally committing to making up any shortfall.

He remarked on the initiative:

“If we exceed our ambitious growth plans our shareholders will benefit and we want to ensure some of that success is shared with the less fortunate in society.”

$25.6 Billion Saudi Aramco IPO Will Be Biggest Ever