The CMC Markets share price slumped by over a quarter of its value yesterday after the online trading platform, one of the UK’s largest, issued a profit warning. The company updated forward guidance issued just over a month ago to tell investors it now expects significantly lower revenues and profit for the year than it did until recently.

The change in CMC’s sentiment comes as a result of a steep drop in trading activity on its platform over August after lockdown restrictions had been dropped across the UK. The CMC share price fell by 27.4% yesterday following the announcement and the negative turn in sentiment also hit rivals IG Markets and Plus500, whose share prices fell by a respective 11% and 3.8%. 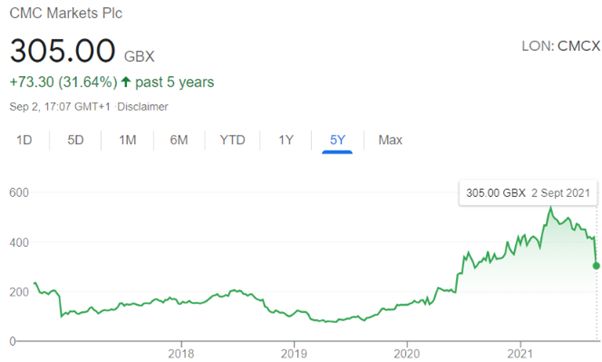 At the end of July CMC had told its shareholders it expected to bring in net operating income of over £330 million over its current financial year to the end of March 2022. Yesterday it revised that down by £70 million to £50 million to between £250 million and £280 million.

Short-term trading of derivatives is not the only kind of investment activity to show signs of a lull after sharply increased levels over lockdown periods. Traditional investment platforms used for trading stocks, buying funds and tax-efficient wrappers like ISAs and SIPPs also reported record volumes of new, often young, customers over the past year and a half. And they’ve also seen activity slow down over the past few weeks.

The UK’s two biggest full-service online investment platforms, Hargreaves Lansdown (HL) and Interactive Investor (II) have both noted a drop off in activity but one they expected. II chief executive Richard Wilson commented:

“We’ve seen a reduction in trading activity starting at the tail-end of the second quarter.”

He added, in respect to the “extraordinary” levels of activity over the pandemic lockdown periods that the privately-owned company “never expected that to continue.”

Despite CMC markets previously noting trading levels had fallen between April and June of this year compared to earlier in the pandemic the summer drop-off still appears to have taken the company by surprise.

In its statement yesterday CMC noted:

“Overall market activity has remained subdued through July and August. Reduced volatility in markets has resulted in lower trading activity across both the newly acquired and existing cohort of clients.”

Investors were also informed client income retention, positive returns generated by traders kept in their accounts rather than withdrawn, “has also been tracking moderately below the targeted 80 per cent, although is expected to recover”.