U.S. software maker Oracle’s share price has leapt by over 4% in the opening minutes of the Wall Street trading session after TikTok owner Bytedance shocked Wall Street by preferring its bid to a rival offer from Microsoft. Despite other companies, including Oracle and Twitter, being linked with deals for TikTok’s U.S., Canadian, Australian and New Zealand operations, Microsoft had been strong favourites to complete the deal. 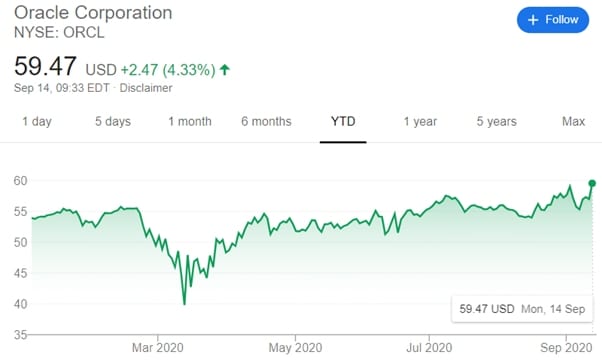 Bytedance have yet to release an official statement but inside sources say that Oracle will be announced as TikTok’s new “trusted tech partner” in its North American and Antipodean markets. Microsoft for its part has confirmed that Bytedance has informed the company its offer won’t be accepted. The world’s 3rd most valuable company last night released a statement which read:

“Bytedance let us know today they would not be selling TikTok’s US operations to Microsoft. We are confident our proposal would have been good for TikTok’s users while protecting national security interests.”

Bytedance do not want to sell TikTok’s U.S. operations but have been left with no choice after the Donald Trump administration issued an executive order accusing the viral video-sharing app as a threat to national security. The accusation was based on Chinese legislation that obliges Chinese companies to hand data over to the country’s communist party rulers if asked to do so.

Bytedance denies the risk, pointing out that all data held on U.S.-based users is held between data centres in the USA and Singapore, not China, and therefor falls outside of the legislation’s jurisdiction. The Trump administrations argues legal technicalities would have little practical impact in a worst case scenario, with Bytedance’s Beijing-based owners and management at risk of imprisonment were they to refuse to comply with a direct order from the Chinese authorities.

Trump ordered Bytedance sell its US operations to an American buyer by early November or be banned from the country. The order also said any U.S. company still involved in commercial arrangements with TikTok after the deadline had passed would be prosecuted. There is general suspicion the order was more influenced by the ongoing trade war between the U.S. and China than genuine security concerns. TikTok has been downloaded 2 billion times globally and is the first Chinese-owned app to become a global hit.

Oracle is far from an obvious partner for a smash hit social media app based on user-generated video content. The software maker is best known for its enterprise-level business solutions. But its trump card, pardon the pun, may be that the company is chaired by Larry Ellison, who is one of the few powers in the U.S. big tech sector to openly support President Trump.

There will certainly be gossip that Trump-supporting management swung the deal in Oracle’s favour, but perhaps more influential is that the deal looks like it will be a watered-down version of an actual sale of U.S. operations. Sources familiar with negotiations say an agreement has been brokered with the Trump administration allowing Bytedance to retain ownership of the U.S., Canadian, Australian and New Zealand unit with Oracle acting as outsourced management and storage of data generated by American users.

Oracle’s ownership status is now expected to amount to no more than a minority stake in TikTok’s U.S unit. But it will also be a major fillip for Oracle’s cloud computing business to secure TikTok as a client.

Bytedance and Oracle both declined to comment on the rumours but announcements confirming the proposed deal are expected either later today or before the end of the week.