Reports out of the U.S. today say software giant Oracle has a serious interest in rivalling Microsoft for the acquisition of TikTok’s U.S. operations. The viral video platform, which is owned by Chinese company Bytedance, has been effectively banned in the USA unless sold to an Amercian-owned company. A surprise executive order from President Trump labelled the mobile app a threat to national security and banned U.S. companies from commercial relations with it while it remained under Bytedance’s ownership.

Microsoft quickly emerged as the leading candidate to buy Tiktok’s U.S., Canadian, Australian and New Zealand operations. The technology giant would still have felt it was in the driving seat when it was last week reported Twitter were also interested. Twitter may be a big name in social media but as a company it is a fraction of the size of Microsoft and lacking the financial muscle to have perhaps been a serious threat to the deal.

Oracle is also, at $165 billion, worth a fraction of Microsoft’s $1.6 trillion valuation. But it’s a far larger company than $30 billion-value Twitter. Oracle may also fall into a sweet spot in the eyes of regulators as it doesn’t currently have any established social media interests, nor is one of the true tech giants, with tentacles that stretch across multiple business verticals.

Oracle is said to have held preliminary talks with Bytedance, with the news first reported by the Financial Times less than a day ago. Like Microsoft, Oracle is one of the few first big technology corporations founded in the 1970s to retain relevancy almost half a decade later. Its core business is to build enterprise-level software solutions such as database tools.

The Financial Times report says that Oracle is working on a potential deal alongside Sequoia Capital, General Atlantic and other US investors that already hold stakes in TikTok’s owner Bytedance. That could give the company an advantage. The clock is now ticking on a deal after Trump’s executive order of last week set a 90-day deadline on a sale. After that, any U.S. company that hasn’t cut commercial ties to TikTok will be prosecuted – unless U.S. operations have already been transferred to a new American owner.

The Trump administration said it was taking the approach because Bytedance would be obliged to share data on TikTok’s 100 million U.S. users with the Chinese government, if asked to do so. Bytedance has denied the allegation and insists it would not, even if asked. It says its data is stored on servers in the USA, with a backup in Singapore, which means it falls outside the jurisdiction of the Chinese government.

Experts believe it is unclear whether the Chinese laws meaning companies must hand over data to the government if asked apply to data held outside of the country.  But highlight that if asked, and refused, the repercussions for Bytedance’s ownership and management would likely be detention in prison in China.

Another factor possible in Oracle’s favour is that co-founder Larry Ellison is one of the few high profile and influential Silicon Valley bosses to actively support the Trump administration. He has even held fundraisers for the president.

Oracle’s share price has ticked up by 2.35% in afterhours trading ahead of Wall Street’s Tuesday session kicking off. 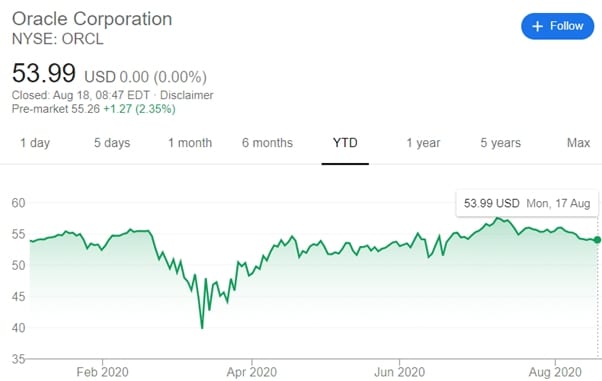 TikTok, meanwhile, has announced it is launching a website and Twitter account to “shine a light on the facts”, and address “misinformation”, about its platform “proliferating in Washington and in the media”.

The social media will use the website to respond to the Trump administration’s allegations about its app as well as release company statements, “expert opinions” and FAQs.