Despite the recent slowdown in the UK property sector, partly due to the ongoing brexit uncertainty, a weak pound has boosted property investment uk by overseas investors. There has been a rise in the number of foreign investors returning to the UK as overseas landlords are coming back to the buy to let market in the country. Property investors from abroad are snapping up properties in the UK as a weak pound is giving them a significantly higher saving despite stamp duty surcharge.

The UK property sector has traditionally been attractive to overseas investors, but the number of homes let by investors based outside the UK has risen over the past year. Property investment uk is viewed by international investors from Asia, US and Europe as a viable investment due to strong capital appreciation, growing rental market and continued private and public investment in the country. Investors are also attracted to property investment UK as it is resilient in times of political unease and provides a relatively secure place for investors to put their money.

According to new research from Hamptons International, the number of overseas-based investors has spiked to 11 per cent of the market share over the past 10 months. It is a significant rise on 7 per cent rise recorded during the same period in 2018. This also represents first annual increase in the number of homes let by overseas landlords since the firm’s records began in 2010.

On the other side of the spectrum, was Wales, which has the lowest number of non-UK landlords at 2 per cent and was the only region in the UK which recorded a fall compared with the previous year.

UK cities with most overseas landlords 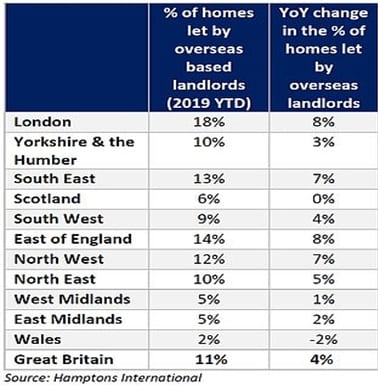 The report found that the rise in landlords from abroad has been driven by the depreciation of the pound since the EU referendum in 2016 which has made it cheaper for international landlords to acquire a rental home in the country. This means foreign investors now get more out of their money than previously. This fall in the value of the currency has offset the 3 per cent stamp duty surcharge on additional property purchases.

Meanwhile, there was a rise in the number of North American landlords investing in the UK rental property market, which reached the highest level since 2014, rising to 14 per cent in 2019 – 1.9 per cent higher than five years ago.

“The proportion of homes let by overseas based landlords rose for the first time in more than nine years. The East and London recorded the biggest increases.”

“Sterling’s depreciation has made investment property in Great Britain more attractive to international investors. The average home cost 23% or £53,065 less than in 2014 for a US dollar buyer, solely due to the currency changes.”

WeWork Lost $1.25 Billion In Three Months Ahead Of Aborted IPO

With bond yields at historical lows, they are not a particularly attractive investment for... END_OF_DOCUMENT_TOKEN_TO_BE_REPLACED

Most of the world’s investment capital is held in the stock of companies known... END_OF_DOCUMENT_TOKEN_TO_BE_REPLACED

It’s not so long ago millennials and Gen Z were being criticised for spending... END_OF_DOCUMENT_TOKEN_TO_BE_REPLACED

After a year that strongly favoured risk-on investments as stimulus cash flooded markets and... END_OF_DOCUMENT_TOKEN_TO_BE_REPLACED