Tinned tomatoes, pasta and toilet roll are not the only things that have seen a surge in demand since Covid-19 pandemic panic buying started in March. Gold has also suddenly become newly popular, last week driving the price of the precious metal up to $1570 per oz. In pound sterling prices reached record highs last week and the standard dollar price is the highest it has been since 2012.

“There’s been a really amazing increase in demand since the lockdown from retail-level investors, people on the street who want physical gold. When people are really worried about stocks and shares and even currencies as a store of value, gold is the ultimate safe haven.”

“It’s the thing that people think of when they think, ‘Where’s the safe place to put money?’ Particularly physical gold products that you can literally stick under the mattress.” 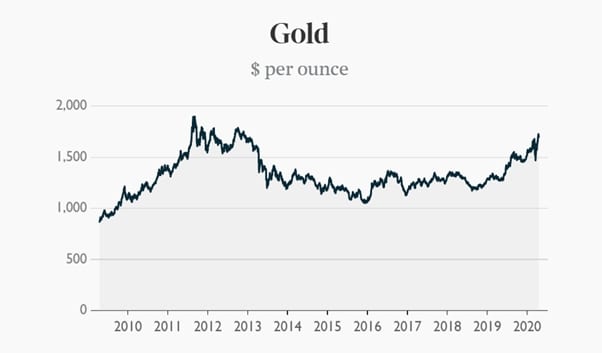 The current best seller of the company founded in 1760 is currently a one-once “Hummingbird” gold coin, made from gold produced by AIM-listed miner Hummingbird Resources. Mr Bett’s brother Dan is the CEO, showing how deeply the gold trade in imbedded in the family.

Over the half year that ended in February, Betts Group sold 15 of the coins. Over the six weeks that followed, up to mid-March, 206 were sold.

The Royal Mint’s Andrew Dickey, precious metals director of the mint that produces the Bank of England’s coins, also noted an “unprecedented demand for gold bullion coins and bars, with sales for the month of March 2020 up by 736 per cent compared to March 2019”.

The Royal Mint recently launched its first gold ETF, which offers investors easier exposure to gold prices than actually physically owning the metal, has also seen a surge in demand. Only launched in February, investors have already ploughed almost $200 million into the ETF. Internationally, gold-backed ETFs attracted $8.1 billion in March according to data published by the World Gold Council. Holdings of ETFs are at a record high, representing 3185 tonnes worth $165 billion.

Gold is considered a “safe haven”, investment as it has a reputation as a store of wealth regardless of what is happening in the world’s financial markets. Historically, that has been a self-fulfilling prophecy with gold prices typically rising during times of turmoil. However, there has recently been evidence of a drop in gold’s anti-correlation to equities markets.

After touching $1700 in early March, gold dropped to $1450 within two weeks with analysts putting the plunge down to a “dash for cash”, as investors indiscriminately liquidated investments. Gold may have been sold off by institutional investors to maintain liquidity and cover other trading margins.

HSBC precious metals analyst James Steel commented that this confirmed rather than belied gold’s status as a ‘safe haven’, because it “acted as a highly liquid asset to be utilised in time of need.”

That is one way of looking at it but a price slump of almost 15% at the same time as equity markets were falling is not the kind of anti-correlation to equities often used as an argument in favour of investors holding incomeless gold. It was also another reminder that gold prices can be highly volatile, more so even than equities markets. That’s another argument against gold’s safe haven status.

Gold can be seen as competing with high quality government bonds during times of financial turmoil and crisis. While gold prices can surge at these moments, they can also suddenly turn downwards, as demonstrated in March. Bond yields can be close to zero or even dip into negative territory when demand surges. But investors know what to expect.

However, another factor in gold’s favour is the huge central bank stimulus schemes that have been launched to combat the economic blow of the Covid-19 lockdown. With ‘money printing’ or quantitative easing surging, there are fears one result of the crisis could be jump in inflation levels in coming months, with the value of major currencies dropping to reflect the flow of newly created cash into markets.

However, HSBC doesn’t see gold prices climbing much higher than they have already reached, with a price target of $1743 for this year. That’s been revised up from an earlier $1613. The gold price is expected to hold at between $1600 and $1700 well into 2021.

Rory Townsend, head of gold at the consultancy Wood McKenzie, believes gold prices could go even higher and potentially test their highs of recent history:

“Once the lockdowns end and we are just left with the severity of economic impact, and potentially inflation starting to creep in, that’s going to be a really conducive environment for gold to move higher potentially and break through $1,800 and potentially test the 2011 highs of around $1,900.”