The Pearson share price has leapt by over 20% today after the American private equity group Apollo announced it is weighing up an all-cash offer for the London-listed educational publisher. The 20% increase in the company’s valuation has taken Pearson’s market capitalisation to just under £6 billion. 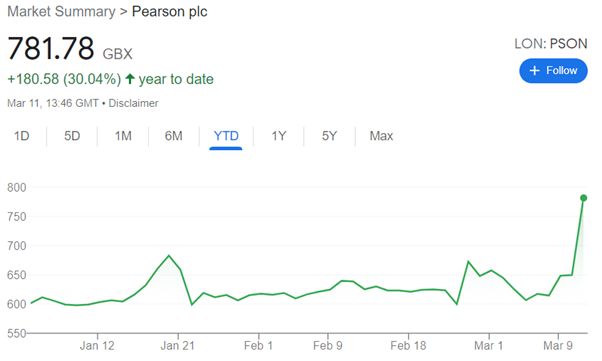 The move by Apollo, which said it was “in the preliminary stages of evaluating a possible cash offer by certain of Apollo’s affiliated funds for Pearson”, is being accepted as meaning the company is now “in play” and could potentially attract rival bids.

Apollo was careful to couch its intentions by saying adding

“there can be no certainty that any offer will be made, nor as to the terms on which any such offer might be made.”

However, there would appear to be little point in the private equity group announcing its interest in Pearson if it is not relatively certain of making a bid unless strongly rebuffed. Apollo has shown strong interest in UK-based acquisitions recently and made losing bids for both the Asda and Morrisons supermarket chains. The company also assessed Metro Bank before deciding against an offer.

Pearson has struggled to make enough ground for investors in recent and is seen to have failed to capitalise on a strong position in the market for textbooks and educational software. It is trying to digitally transform itself into a ‘Netflix for educational content’ but the company is worth less than half of its 2015 market capitalisation even after today’s 20% rise.

The company’s board is also under pressure from the Anglo-Swedish activist investor Cevian, which has built up a 10% stake. A previously diverse company with assets that included Madame Tussaud’s, the Financial Times and the French wine estate Chateau Latour, those days Pearson is focused purely on educational publishing.

Pearson’s chief executive Andy Bird has been in his position since October 2020 and is a former Disney executive. Before his arrival Pearson had issued six profit warnings in seven years and digital transformation has been his focus since assuming the role. He recently told The Sunday Times:

“I think that within five years, people will look at this company in a totally different light and go, ‘I never appreciated the breadth and the strength of their assets.’ “

However, it remains to be seen if Pearson will still be a public company in five years. Takeover rules dictate that Apollo, having now publicly announced its interest, has until April 8 to make a bid or walk away. The New York-based private equity group has approximately $498 billion of assets under its management.