The Pinterest share price gained 7.3% yesterday, adding another 1.11% in afterhours trading, to reach new record highs after reports of a takeover approach by Microsoft. The image-sharing social media platform’s valuation gained over $3 billion as a result, extending a strong bull run that has seen the Pinterest share price gain almost 700% since recovering from last year’s early spring stock market sell-off. 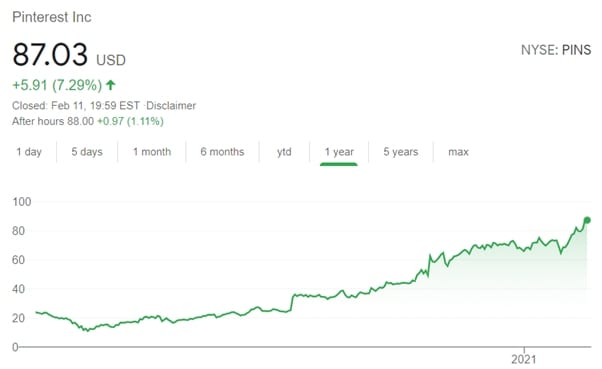 Microsoft itself has also benefitted from the wider tech sector bull market that has particularly benefitted internet companies. Its own valuation is up almost 80% since last March, taking the Windows and Office publisher’s market capitalisation to an incredible $1.8 trillion.

Microsoft is starting to make a habit of sniffing around modern social media platforms that may not immediately seem an obvious fit with its focus on productivity software and personal and cloud computing. Last year it bid for the U.S. operations of Chinese-owned video-sharing app TikTok, when ex-President Trump moved to ban it unless it was sold to an American company.

Microsoft already owns professional networking platform LinkedIn, but the connection to its other products is clearer than would have been the case with TikTok. Or Pinterest now. The Financial Times reports Microsoft has recently approached Pinterest to sound the company out over a possible acquisition. The FT also said it believes discussions between the two companies are not currently active. However, the news sending Pinterest’s share price up significantly suggests markets believe there may still be active interest and doors haven’t been closed.

San Francisco-based Pinterest was founded in 2009 and is particularly popular with creative professionals, showcasing their work on the platform, or private individuals looking for design inspiration for anything from home interiors to weddings. The platform has 450 million active users a month.

Disney+ closes in on 100 million subscribers after just 13 months

Disney+, the streaming platform launched by the entertainment giants as a rival to Netflix just 13 months ago in November 2019 has already attracted 94.9 million subscribers. Disney+ offers subscribers the entire Disney back catalogue, including movies like the Star Wars franchise and Disney classics from Bambi to The Lion King. Soul, the latest offering from Disney-owned animation studio Pixar, skipped a cinema release altogether and went straight to Disney+.

While that was a decision heavily influenced by the ongoing coronavirus crisis, Disney has invested heavily in original movies and TV shows which are often spin-offs from its big franchises like the Star Wars-inspired The Mandalorian.

Despite the pandemic hitting Disney’s revenues by forcing its theme parks and resorts to close and making cinema releases difficult over the past year, the company’s share price gained around 1% yesterday in afterhours trading after it posted a milder than expected slide in quarterly sales.

Total revenues were, however, still down by 22% on the same period a year earlier, coming in at $16.25 billion. But lockdown restrictions have been good for streaming services and digital entertainment generally. Disney chief executive Bob Chapek yesterday focused on strides made by the group’s services in the digital entertainment sector, which include the Hulu streaming service and ESPN+, as well as Disney+. Together, the services now have a total of 146 million paying subscribers.