The Plus500 share price has gained almost 3% (2.8%) today to take the financial markets trading platform’s return for the year to over 7% after the company announced it is on track to announce record full-year results.

A drop in the activity of amateur traders over the last three months of 2021 saw Plus500’s share price lose almost 15% between late October and early December. However, fourth quarter results issued by the company yesterday showed the slide wasn’t significant enough to derail full-year revenue and profit figures. 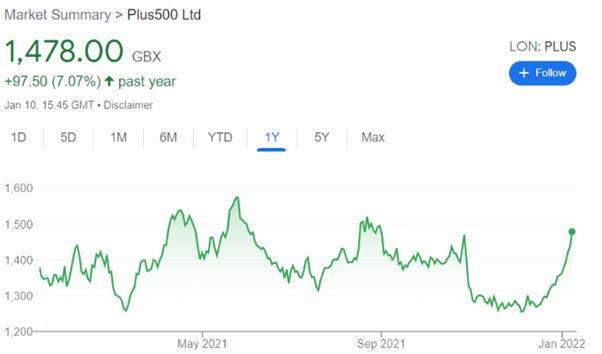 A huge third quarter brought in $211 million in revenues thanks to the boom in armchair trading and especially “meme stock” trading that took off during the pandemic. By contrast the $160 million in revenues generated between October and December were slightly disappointing. However, overall, 2021 was an excellent year for the spread betting and CFDs broker.

Plus500’s market update informed investors the company had benefitted from

“an outstanding operational and financial performance throughout 2021, ahead of market expectations”.

Revenues over the calendar came in at $718 million, some way ahead of analysts’ expectations for $655 million. $702 million of that was generated from customers’ trading activities with the rest from other revenue streams such as interest earned on account balances.  The company’s official full-year results will be reported on February 15th.

Plus500 is an Israeli-owned company established in 2008 and based in Haifa. It has been listed on the London Stock Exchange since 2013 when it joined the AIM exchange before upgrading to a full listing in 2018.

The trading platform company appears to have benefitted from extending the variety of financial instruments it offers derivatives trading for. The acquisition of the regulated futures commission merchant Cunningham Commodities allowed Plus500 to establish a new position in the futures and options market.

A traditional non-leveraged stockbroking platform, Plus500 Invest, has also been launched and

“will be rolled out on more platforms and in additional target markets in the upcoming months.”