The Polymetal share price has dropped by almost 6% today on calls for the London Stock Exchange to take action after it was revealed the Russian miner has been the most traded company on the London Stock Exchange since late February. The stockbroker AJ Bell’s leaderboard of most traded stocks has been topped by the gold miner since February 25th, a day after Russia invaded Ukraine despite the company being excluded from FTSE indices.

The miner’s value has risen over 100% in the past month after its valuation was shattered as investors fled Russian stocks in a combination of protest against the invasion and concerns over potential sanctions. But since the initial sell-off, ordinary investors have been taking a chance on the Polymetal share price, hoping to benefit from its rock bottom valuation. 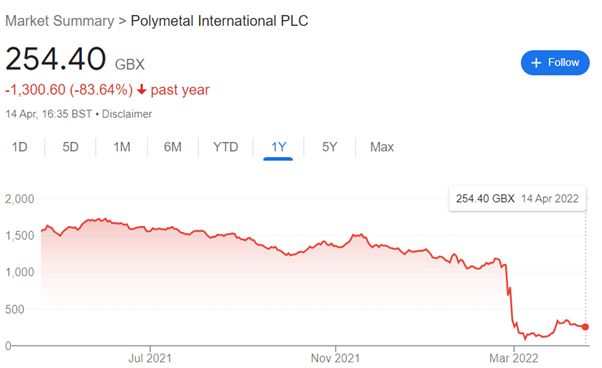 The company’s recovering market capitalisation has led to accusations that the London Stock Exchange is guilty of irresponsibility for allowing its shares to continue to trade freely. The LSE Group has declined to comment but is reportedly “monitoring the situation closely”.

Criticism of the situation is centred around the fact that the miner’s production of gold and silver provides a source of revenue for the Russian state, helping to fund its war on neighbouring Ukraine. And that the retail investors buying its stock may not be aware of the extent of the risk of it being sanctioned. Alan Medoza, executive director of the pro-democracy think tank the Henry Jackson Society, commented for The Times newspaper:

“Polymetal’s productions of gold and silver is a core source of revenue for the Russian state and its profile means it is a likely target for future rounds of sanctions.”

“When its auditor has pulled out of working for the firm after the invasion of Ukraine, it’s irresponsible for the LSE to continue to allow retail investors to jeopardise their savings and capitalise the firm by trading Polymetal stock.”

Despite gains since the late September sell-off, the Polymetal share price is still down around 75% since the beginning of the war. It currently trades at 254p-a-share compared to 843p ahead of Russia invading Ukraine.

Polymetal has been listed on the London Stock Exchange since 2011 and operates nine mines producing gold and silver in Russia and Kazakhstan. It was founded in 1998 by the Russian oligarch Alexander Nesis.

“represented a buying opportunity for investors brave enough to take the plunge when the share price bottomed out in March”.

Other commentators were far less neutral with the Labour MP and chairman of the parliamentary standards committee Chris Bryant asserting:

“Some people really don’t get it. These investments are aiding and abetting Putin’s war.”

Polymetal last week announced it would postpone its decision on a final dividend for the last financial year due to liquidity issues and supply chain challenges that meant it needed to maintain higher than normal levels of working capital. The week after Russia invaded Ukraine the company proposed a $0.52-a-share dividend adding up to a total investor payout of $246 million.