Whitbread, the FTSE 100 company that owns the Premier Inns hotel brand and Beefeater restaurants is to call on existing investors to fund a new £1 billion rights issue. The cash will be used to ‘shore up’ the companies balance sheet for the duration of the Covid-19 pandemic, which has hit the travel and tourism industries hard. It is also a strategic move to give the company a strong position from which to take advantage of potential acquisition opportunities expected to present themselves over the months ahead.

Announcing the issue yesterday, Whitbread told investors that it had entered the pandemic from a position of “a strong balance sheet and significant liquidity”, but that that its significant fixed expenses mean that “material cash outflows” are inevitable while its hotels and restaurants remain shuttered.

Net of expenses, the issue will bring a total of £980 million into the company’s coffers. That will allow it to absorb short-term losses, while leaving it in a position to “support continued investment in Whitbread’s strategy while its budget-branded and independent competitors are expected to be weakened by the Covid-19 pandemic”.

That is being interpreted as a significant part of the funds being earmarked as available to take advantage of attractive acquisition opportunities that may present themselves in the form of less liquid competitors finding themselves in trouble.

Unlike many of the share issues launched by companies over the course of the pandemic, Whitbread’s will also offer small retail investors the opportunity to participate alongside institutional investors. The offer to existing shareholders is the opportunity to acquire one new share for every two they currently own. 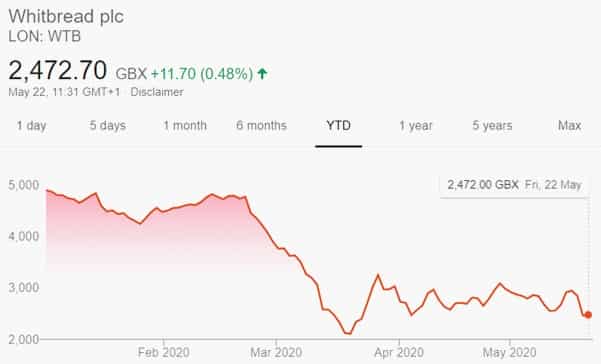 Whitbread’s history is a long one, with the company first founded as a beer producer in 1742. However, having sold off the beer business in 1999, it has evolved into an operator of budget hotels and restaurants. It runs over 800 hotels across the UK, Germany and the Middle East as well as around 400 eateries under the Beefeater, Brewers Fayre and Table Table ‘pub restaurant’ brands. The group employs over 36,000 staff.

Despite its share price crash since the beginning of the coronavirus crisis, Whitbread is considered a very well-run company. Shareholder were rewarded with a £2.5 billion payout early this year after the company sold its Costa Coffee brand to Coca-Cola for £3.9 billion. A deal that looks attractive in retrospect.

The trading environment for the company’s Premier Inn budget hotels brand has been tougher in recent times and last year Whitbread announced a cost cutting programme designed to reduce expenses by £220 million over 3 years. Other cost cutting measures have been brought into place since the onset of the pandemic shut down most venues, including the withdrawal of the planned final dividend, slashing discretionary costs and non-essential maintenance work. 27,000 staff have also been furloughed, though Whitbread is topping their salaries up so they receive 100%.

In Germany, where lockdown measures are being relaxed ahead of those in the UK, 16 hotels reopened last week. 13 were recently acquired. Another 36 are in the process of being converted, three of which will open over the coming weeks. Bookings for July are also now being taken in the UK, pending official advice. 39 Premier Inns have kept working in the UK to service NHS and other key workers. That, says the company, has given it “a really good head start” to its upcoming relaunch.

“Whitbread’s rights issue will give it the firepower to be a nightmarish competitor once Covid-19 is over. It will be able to make operational decisions based on growing market share rather than conserving cash.”

Rolls-Royce To Cut 9000 Jobs In Biggest Cull Since Privatisation