While the value of global stock markets has trended up for decades with remarkable consistency, the number of public companies has fallen significantly since peaking in the late Nineties. 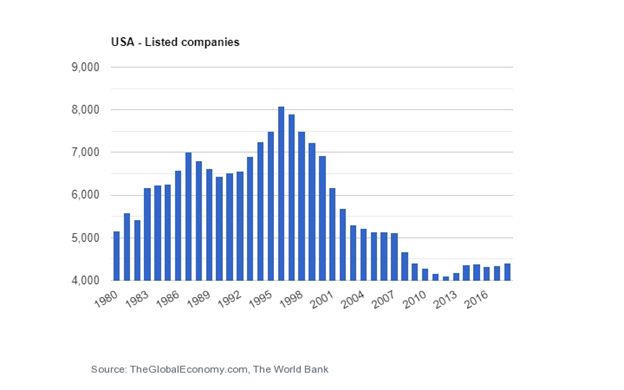 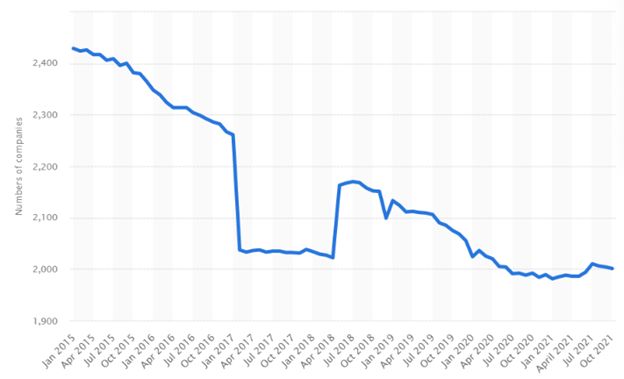 In August 2000, the total market capitalisation of the LSE’s main market was £5.3 trillion. Today, a little over 21 years later, it has dropped to around £2.4 trillion – a decrease of over 50%. This, it’s worth stressing, is in nominal terms; the decline in real terms, after adjusting for inflation and the fall in the comparative value of the pound, is even more precipitous.

Despite a strong 2021 for IPOs, the number of companies listing in the UK is also continuing to fall when looked at as a long term trajectory. That means the trend towards a smaller London Stock Exchange doesn’t look like it will turn any time soon.

World Bank data shows the global trend is following the same pattern, though the reverse only started around 2010. 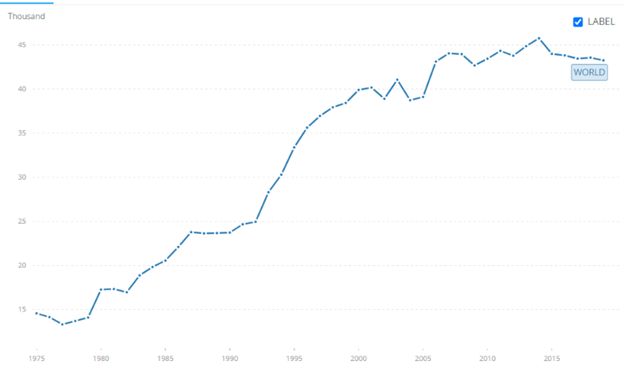 Public stock markets will, of course, continue to be a pillar of capital markets and investment portfolios. But it is also a fact that more companies are shunning the pressure of delivering quarterly growth stock markets demand for longer by remaining private until a later growth stage. Or retiring from public markets to return to private ownership.

Private equity typically works in two ways. Either it invests in young, growing companies and, if all goes to plan, realises profits when they eventually go public or are bought up by a larger company a few years down the line. Or it acquires already established companies seen as failing to realise their full value potential. These can be companies that are currently privately owned.

Over the past few years, private equity firms have also been increasingly targeting public companies they believe could perform better with the luxury of a period of restructuring without the need to meet investor demands for constant growth. Since the start of the pandemic, we’ve seen private equity groups snap up major London-listed companies such as the supermarket chain Morrisons outsourcer G4S, infrastructure builder John Laing and defence companies Meggitt and Ultra Electronics.

Private equity has seen an opportunity in the cool attitude to London-listed stocks from stock market investors over the past several years. A mix of Brexit and Covid saw valuations trail comparable companies listed on Wall Street and other developed markets. Private equity has spotted a bargain.

According to a report by J.P. Morgan Asset Management, since 2009 private equity funds have delivered between 1% and 5% in excess annualised returns (net of all fees) over the S&P 500 index, the benchmark the firm used for public markets. And the S&P 500 has performed considerably better than London’s FTSE 100 over that period.

Some market analysts believe it will become harder for private equity funds to deliver similar outsized returns in future, with margins shrinking. However, there is still a strong argument private markets both offer good diversification from public markets and could well continue to outperform them over coming years.

Private equity is often seen as an option that is restricted to institutional investors or the wealthy. But there are also opportunities for retail investors to gain exposure to private markets via funds and listed trusts. And they’ve done very well over the past ten years.

The HarbourVest Global Private Equity trust whose holdings range from the online clothing retailer Shein to the cryptocurrency exchange Coinbase has gained almost 600% over that period. 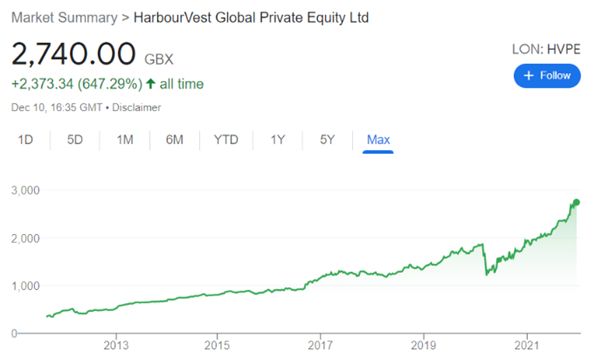 By comparison, the Fundsmith Equity fund that invests in publicly listed companies internationally, and is considered to have performed well, is up by 467% over the past decade. And despite its strong share price returns, HarbourVest still trades at a discount of around 16% to its net asset value (NAV).

Other private equity trusts available to UK-based retail investors have also generally performed well over the same period. And also still trade at a discount to NAV. Pantheon International trades at an approximately 18.5% discount to its NAV, ICG Enterprise at a 17.5% discount, NB Private Equity over 20% and Standard Life Private Equity at around 15.5% below NAV.

Investors have noticed and the investment platform Interactive Investor says HarbourVest was its fourth most bought trust in October and November. At the start of October, its discount to NAV was almost 29% and it still looks cheap despite a 15% share price gain since.

Why are private equity trusts trading at a discount to NAV?

One of the main reasons private equity trusts have traded for so long at steep discounts is thought to be investors being put off by relatively expensive fees and complex structures. The Association of Investment Companies says HarbourVest’s ongoing charges and performance fee added up to 2.5% last year.

The trust’s performance has justified the fees but they could prove a burden in leaner years. There are, however, cheaper options. Scottish Mortgage, for example, which invests in both public and private markets, charges just 0.34% a year.

Who should consider private equity exposure and how much?

Financial advisers typically recommend retail investors only invest in private equity with a time horizon of at least 15 years due to the asset class’s greater volatility than public markets. For example, shares in private equity trusts dropped by up to 50% from February to March 2020 when the Covid-19 pandemic first struck and markets briefly panicked. The S&P 500 lost around 21% over the same period.

Investors should leave plenty of time for private equity holdings to bounce back from such shocks. It’s also usually recommended that retail investors don’t allocate more than around 10% of their portfolio to higher risk, higher reward private equity bets.

But for those with an already well-diversified portfolio, private equity could be an interesting option in the pursuit of long term returns.