Private equity giants Blackstone has increased its takeover offer for London-listed property development and investment group St Modwen Properties to £1.27 billion. New York-based Blackstone, the world’s largest private equity group with around $620 billion in assets under management, originally bid £1.24 million for St Modwen back in May.

The St Modwen board have proven receptive to the bid, telling Blackstone it would unanimously recommend the property company’s shareholders accept the offer if officially tabled. However, after one major shareholder pushed back with the claim Blackstone was underpaying for the deal, the latter has sweetened its offer by £30 million. 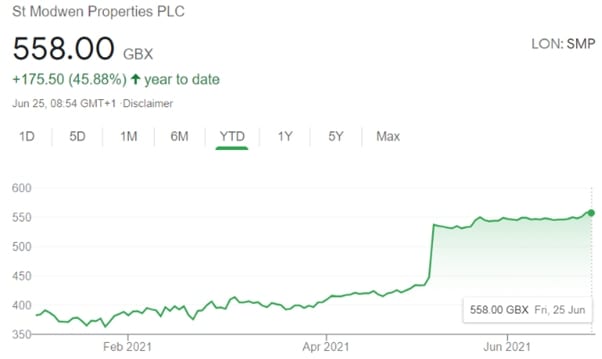 At the time of Blackstone’s first offer, London-based fund manager JO Hambro Capital Management, which owns 9% of St Modwen, said that it would prefer to work with the existing board to develop the company’s value. It believed an acceleration of the strategy already in place would see the company’s value rise to “well in excess” of the price proposed by the American private equity group.

Blackstone’s new proposal raises the offer per share to 560p from 542p, representing a 25% premium on the St Modwen’s closing share price the day before the original offer was made in May. Alex Savvides, a senior fund manager at JO Hambro, was yesterday critical of the St Modwen board’s acceptance of the initial bid in light of the sweetened offer. He scathingly commented:

“Today’s statement of an increased offer for St Modwen is vindication of our firm opinion that the board had sold all shareholders short in accepting the previous offer.”

He went on to describe the increased offer as

“a begrudging acceptance by Blackstone that it is underpaying for this asset. But, given the board’s willingness to sell, its offer acceptance from the start and with no other major shareholder prepared to support our stance publicly, it was always going to be a difficult battle to fight”.

JO Hambro will now, however, vote in favour of the new offer being accepted.

“We believe this is a business with great potential and we will be providing significant additional capital to accelerate its existing plans and to fully realise the opportunity for the business, its customers and its employees.”

Over the past several years, Birmingham-based St Modwen has recalibrated its business by selling off retail parks, shopping centres and office space with the money raised reinvested in warehouses and residential housebuilding. The shift in strategy has proven a wise move, especially against the backdrop of the Covid-19 pandemic which has hit retail and office landlords hard. Warehouses and residential are at the opposite end of the spectrum as two of the best performing sectors in real estate.

Blackstone still needs to win the votes of over 75% of St Modwen shareholders to seal the deal. However, with JO Hambro now on board and Aviva Investors, which owns 7.3% of the company, also stating it would support the Blackstone offer that now seems likely to be achieved.