Nick Candy, the 46-year-old property tycoon behind the One Hyde Park Knightsbridge development where the cheapest apartments started at £20 million, is said to be plotting a takeover of FTSE 250 property company Capital & Counties (Capco). The company has seen its share price almost half since peaking in 2015, making it a potentially attractive target for a buy-out bid. Rumours that may be imminent have seen the Capco share price gain over 46% since an August low and yesterday’s gains represented an 8.29% surge on reports Mr Candy’s interest in the company is serious. 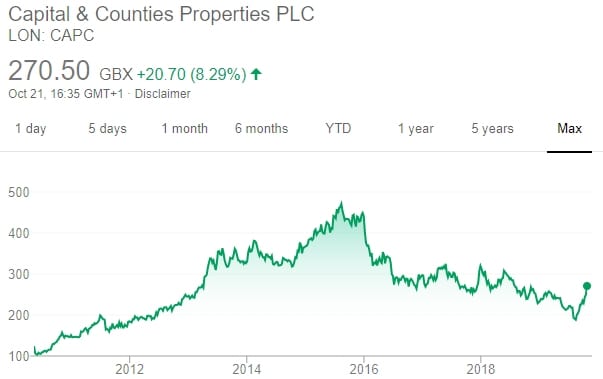 Capital & Counties is the owner of both Earls Court and Covent Garden in London and recently announced plans to demerge its holdings in both areas with a view to attracting bids for them. Its ownership of Earls Court, the majority of which is held in a joint venture with Transport for London, has seen its value almost half over the past four years. An ongoing battle with Hammersmith & Fulham council over Capco’s plan to build thousands of high end homes at Earls Court and a general slowdown in the central London, prime property market have combined to dent investor sentiment.

Candy would not be the only competitor in the hunt for Earls Court. The Times newspaper reports that Delancey, the property investment company chaired by ex-British Land boss Sir John Ritblat and owner of the Olympic Village in east London, is also in the running. As is the Canary Wharf Group. The Earls Court holding was last valued at around £412 million while Covent Garden, which includes the freehold to Apple’s flagship store, is valued at around £2.6 billion.

Capco’s current market capitalisation is, however, just £2.3 billion, making it an obvious takeover target despite the fact that any buyer would be expected to have to pay a significant premium on today’s share price. Candy would not have the finances to mount any takeover bid alone but is said to be in preliminary talks with Saudi Arabia’s Public Investment Fund over a joint venture.

Since going his own way from brother Christian, with whom they developed One Hyde Park under their Candy & Candy company, Nick has moved into tech as well as property investment. During the summer he made a £2 million investment into struggling ticketing start-up Vibe Group and also has a stake in Betconnect, a ‘copy gambling’ start-up. He has had some setbacks, however, as a tech investor. Another company he had a stake in, the augmented reality start-up Blippar, went into administration in 2018.