For everyone sensibly investing online in traditional assets such as stocks, bonds and funds, news that rare whisky investments have returned nearly 600% over the last ten years might make you feel like you need a stiff drink. The contrast in fortunes was even more marked over the past twelve months.

While the FTSE 100 suffered a 2018 loss of 12.5%, the prices the best Scottish whiskies sold at increased 40%. Two new records for a bottle of whisky were also set with a £700,000 sale in October quickly surpassed a month later by another bottle going for a cool £1 million.

The data comes from the Knight Frank Luxury Investment Index 2018 which tracks alternative investment classes such as fine wine, art, vintage cars, coins and stamps. And rare whiskies of course. 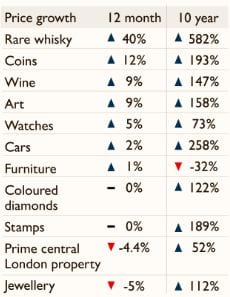 It is not even just the absolute top end of the market that is driving price growth. Good whisky is a relatively affordable luxury with high quality, limited edition bottles starting at around £150. With the drink’s global popularity, demand for bottles priced in the hundreds and thousands has soared. Whisky collectors from Asia, particularly China and India, have been the biggest driver of demand.

“The market for rare and vintage bottles has witnessed extraordinary growth over the past ten years, both in terms of the volume of whisky being traded and the value of that whisky. We are at the centre of a perfect storm right now in terms of supply and demand.”

Mr Simpson advised anyone interested in dabbling in whisky investment to start with choosing limited edition bottles and distillery releases. The latter is only available directly from the distillery so buyers have to make the trip to pick up a bottle. A handful of distilleries are also, says Simpson, worth focusing on as the most popular whiskies tend to come from those. He lists Bowmore, Springbank, Macallan, Laphroaig, Clynelish and Dalmore as examples. Otherwise, he notes that pretty much any single malt bottle dating back to the 1950s or 1960s is rising in value.

So should you dump your ISA or SIPP investments and invest your pension in expensive whiskies? As well as whisky investors have done over the past 10 years that’s probably not advisable. The problem with alternative investments is there is no fixed market price and they can only be sold for whatever someone is willing to pay. They are also illiquid. You can’t just sell at the touch of a button as you can with online investments in regulated financial markets. And they don’t produce income. The investment relies purely on an eventual selling price being higher than the purchase price.

Alternative investments are usually advised as ‘passion investments’ that a small portion of any investment portfolio is allocated to. It’s very difficult to predict how value cycles may turn in the future. Usually alternative investments such as vintage cars, wines, art and whiskies are hobby investments because the investor actually wants to own the asset due to personal interest. If the asset happens to rise significantly in value a decision to sell might be made and a profit welcomed. But if not, the holder has still enjoyed owning the item.

Euro at multi-year lows after dovish signals from ECB

As New Auction Records Set Are Wine and...

The Turbine Technology Turning Wind Into a Mainstream...

Should you Be Investing in Gold in 2018?