Tech stocks listed on the major Wall Street exchanges suffered their worst session in over two years yesterday as the Nasdaq composite index lost 5%. Market fears around inflation levels and the growing likelihood of a recession returned to push bond yields up and equities lower, with growth stocks bearing the brunt.

Big tech names including Amazon and Netflix lost more than 7% each and even Apple, Microsoft and Alphabet suffered heavy losses of between 4% and 6%. Tesla was down by over 8%. 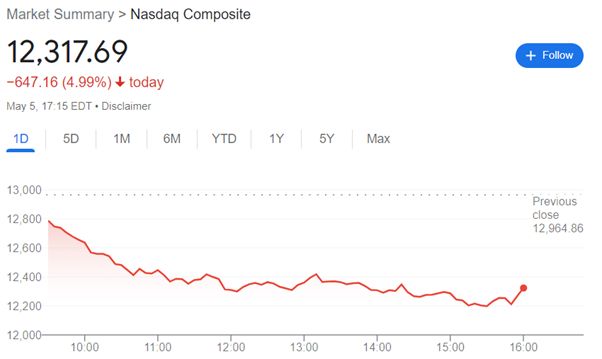 On Wednesday, Fed chairman Jerome Powell told markets that after the 0.5% hike to interest rates that had just been introduced, the biggest one-time increase in two decades, larger increases were not being actively considered for the coming months. However, with inflation data continuing to raise concerns market participants are not convinced. Traders currently believe there is a 75% chance of a new 75-basis-point, 0.75%, rise in rates when the Fed’s commission meets again in June.

That rattled stock markets badly with the broader based S&P 500 and Dow Jones industrial average also sustaining heavy losses of 3.6% and 3.1% respectively. While not as sever as the 4.99% hit taken by the tech-heavy Nasdaq, it is extremely unusual for the major indices to move so significantly over a single trading session.

However, while few sectors escaped yesterday’s sell-off tech stocks are proving especially sensitive to these market jitters because high inflation and higher interest rates hurt the real value of the expected future earnings their high valuations depend on. Interest rate worries were also reflected in bond markets where two-year US Treasury yields rose to 2.699% with a gain of 8.3 basis points. Benchmark 10-year not yields added 17 basis points to rise to 3.08%, their highest level since 2018.

Yesterday’s equities rout followed a Wednesday trading session that had been Wall Street’s best in almost two years, with the S&P 500 up 3% and Nasdaq gaining 3.2%. Yesterday those gains, and some, were reversed.

Speaking the the U.S. news network CNBC, Carlyle Group co-founder David Rubenstein told investors to buckle up for more volatility ahead, telling them to “get back to the reality” of the factors facing markets and the global economy, especially high inflation and rising interest rates.

He warned there are: