The share price of London-listed housebuilder Redrow, one of the UK’s largest, has dipped by a little under 0.5% today despite the company announcing a record £1.43 billion order book built up over the first half of the year. The housebuilding sector has generally done well over recent months thanks to a sales boom over the pandemic spurred by the government’s stamp duty holiday and increased demand for larger properties in suburbs, smaller towns and more rural areas.

The majority of the bulging order book was built up over the early months of the year but has led to a slowdown in the company’s rate of sales since due to now limited stock. The 11 weeks since the end of June has seen Redrow’s sales rate per site drop to 0.66 homes compared to 0.84 over the same period a year earlier. The company also told investors it expects the next nine months to see the market for houses to return to more typical levels. 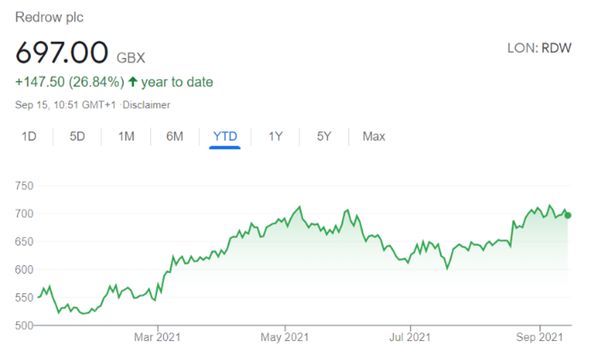 The company completed a total of 5620 new homes between the beginning of the year and June 27, representing a 39% rise on the previous year when early pandemic restrictions slowed down construction work. Pre-tax profit came in well ahead of analysts’ forecasts for £302 million at £314 million thanks to revenues that were up 45% year-on-year £1.94 billion.

“The buoyant housing market has moderated in recent months and we anticipate sales rates will return to historically average rates over the course of the current financial year.”

Redrow see the government’s stamp duty holiday over the pandemic period, which has been tapered since July and will end next month, as the biggest boost to the market over the past year and would like the tax to be reformed permanently. A statement read:

“Given the unquestionable success of the temporary reductions in stamp duty to stimulate the housing market and its obvious knock-on benefits to the wider economy, we repeat our previous requests for government to consider a permanent reform of this tax, which is a constraint on the market.”

Dependency on the government’s Help to Buy scheme, due to end in 2023 and limited to first time buyers purchasing homes under regional price caps since this spring, has been reduced. Over the second half of the previous financial year, the scheme accounted for 50% of all Redrow’s sales which has dropped to 13% this financial year.

Redrow has added a total of 8300 plots to its land bank over the past financial year.