A study carried out by online stockbroker and investments platform AJ Bell has, for the fourth year in a row, shown a pattern of analysts getting their share tips spectacularly wrong. Many DIY investors look at research produced by City analysts for ideas and insights when trying to decide which stocks to buy and sell in the months ahead. Many analysts include ‘buy’, ‘hold’ and ‘sell’ recommendations on a stock to accompany broader research and analysis.

But it looks like those recommendations are probably best to be ignored. Or even used as an indicator it might be worth considering doing the exact opposite. The AJ Bell research has found that stocks whose prospects analysts are most pessimistic about and attach a ‘sell’ rating to often do better than those they are positive on and tag a ‘buy’ rating to. 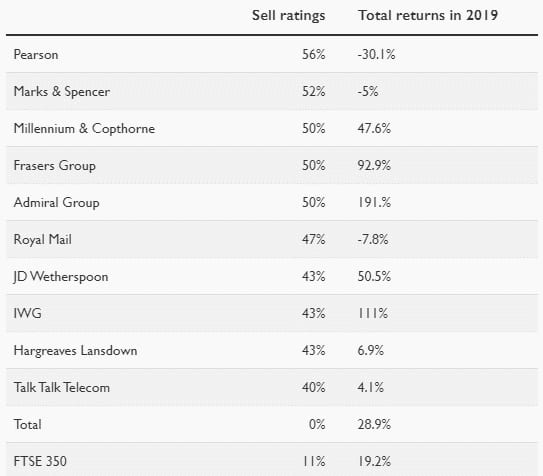 Research produced by City stockbroking companies and investment banks has recently been subjected to scrutiny. Until 2018, research and analysis made available to investors was generally funded by charges applied to the execution of trades. However, changes to European rules governing how such research is paid for introduced by the 2018 Markets in Financial Instruments Directive (Mifid) II regulations, mean that is no longer the case. Companies have to pay for research separately. The belief is that these changes will help avoid potential conflicts of interest.

The AJ Bell study doesn’t necessarily mean there is no value in DIY investors reading research and analysis compiled by City experts. The commentary and data highlighted in such research can still be very insightful and add value. But the ratings themselves should clearly be taken with a large pinch of salt. They certainly shouldn’t be relied on as the basis for choosing to actually buy, sell or hold a stock and DIY investors should do their own research and come to their own conclusions. Those who don’t feel confident in having the knowledge and experience to do so would probably be best sticking to inexpensive benchmark tracking funds. Or carefully chosen actively managed funds.

One of the biggest discrepancies between ratings and eventual outcomes was the 43% ‘sell’ rating for IWG, which owns the Regus serviced offices brand. By the end of last year, the stock had generated returns of 111%. 50% of analysts who rated Frasers Group (previously called Sports Direct) indicated investors should consider it a ‘sell’. It returned 92.9% over the year.

“It just shows how hard picking stocks can be, even if it’s your full-time job.”

A little over a week into 2022 we’ve already experienced some major market movements.... END_OF_DOCUMENT_TOKEN_TO_BE_REPLACED

One of the FTSE 100’s current disadvantages, when it has come to attracting international... END_OF_DOCUMENT_TOKEN_TO_BE_REPLACED

Did you know you could build wealth by investing in Lego? A study suggests... END_OF_DOCUMENT_TOKEN_TO_BE_REPLACED

With most major stock markets around the world spending time at or near record... END_OF_DOCUMENT_TOKEN_TO_BE_REPLACED

For years, Baillie Gifford’s technology funds have been driving outsized returns for the mainly... END_OF_DOCUMENT_TOKEN_TO_BE_REPLACED