Jean-Sébastien Jacques, the chief executive of London-listed mining giant Rio Tinto will leave the company “by mutual consent”, following an outcry at the destruction of sacred Aboriginal caves in Australia. Mr Jacques will step down by the end of March at the latest, with the hunt for his successor now on. If an appointment is made early enough the current chief executive will step aside earlier.

Two other executives an internal investigation also found to be partly responsible for the scandal, Chris Salisbury and Simone Niven, will both leave the company before the end of the year. Mr Salisbury currently heads up Rio Tinto’s iron ore division and Ms Niven is head of corporate relations.

The Rio Tinto share price has not been dramatically affected today following the announcement, slightly down by 0.59% heading into the close of the trading week. 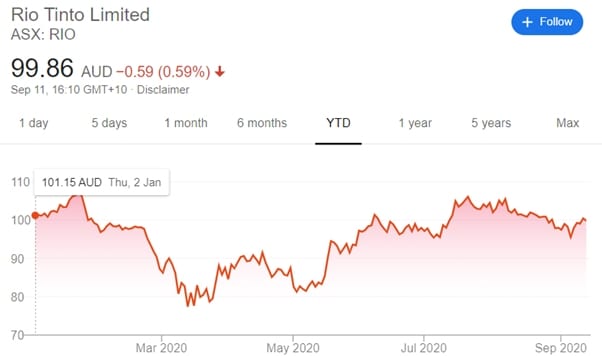 The executive trio have fallen on their swords three months after the company’s decision to blow up two 46,000 year-old rock shelter in Juukan Gorge in the Pilbara region of Western Australia. The decision was taken as it allowed for the expansion of an iron ore mine owned by Rio Tinto adjacent to the site of the caves. The move provoked a public outcry and the fallout mushroomed after leading investors including Aberdeen Standard, Australian Saper and Hesta expressed concerns about executive accountability. All three have publicly welcomed the decision for the three executives to leave their roles.

Rio Tinto is one of the world’s largest and most valuable mining companies. In 2019 it banked profits of $10.4 billion, most of which came from Australian iron ore mining operations. Mr Jacques has been Rio Tinto’s chief executive since 2016 and it is believed that the most likely scenario is that his successor will come from outside of the company, with analysts saying there is no obvious in-house promotion.

Rio Tinto’s decision to blow up the caves was legal after the company received official permission to do so in 2013. However, in following years they were determined to be sites of the “highest archaeological significance in Australia”. Have secured the legal right to do so, Rio went ahead with their destruction, open up access to around 8 million tonnes of iron ore. While that may sound like a lot, it is relatively insignificant in the context of the Pilbara mine’s annual 2019 production of 327 million tonnes of ore.

Public outrage pushed Rio into an internal investigation that concluded “systematic failures” within the company were to blame for the decision. Initially, while finding each of the three executives that will leave the company were “partially responsible” for those failures and the outcome, the investigation advised they retain their posts. They were punished by having their bonuses cancelled.

The company’s investors, however, were unsatisfied by the extent of measures and a petition in Australia signed by over 30,000 people called for Mr Jacques removal as chief executive.

Rio Tinto chairman Simon Thompson stated alongside the announcement of the departures:

“What happened at Juukan was wrong and we are determined to ensure that the destruction of a heritage site of such exceptional archaeological and cultural significance never occurs again at a Rio Tinto operation. We are also determined to regain the trust of the Puutu Kunti Kurrama and Pinikura people and other traditional owners.”