Despite pricing its IPO at the low end of its range of $38-$42-a-share the Robinhood share price took a beating yesterday as it made its debut on Wall Street’s Nasdaq exchange. At one point the financial markets trading app company saw its $32 billion IPO valuation drop by as much as 12% before recovering to some extent.

A tough first day as a public company comes hot on the heels of what was already a disappointing initial public offering for a much-hyped technology company. Robinhood, which offers commission free trading and makes its money selling auxiliary services to investors, has seen its user base soar over the coronavirus crisis. 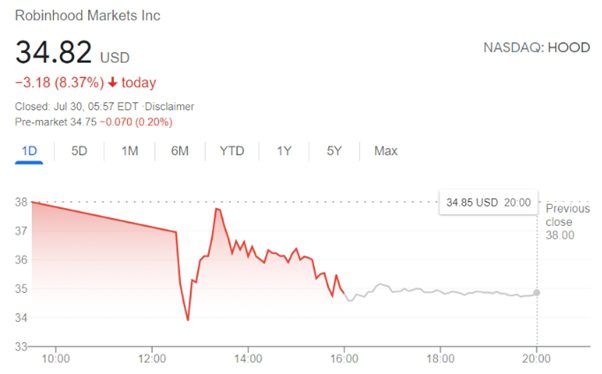 A new generation of young traders have taken up playing the financial markets while stuck at home over lockdown periods and app-based services like Robinhood, the market leaders, have been their choice of broker. The boom in online trading has been most highlighted by the subreddit group #wallstreetbets, whose thousands of often inexperienced small traders have been coordinating themselves to attack the short positions hedge funds had taken on stocks like video games retailer GameStop.

Robinhood’s IPO had been highly anticipated but seemed to suffer from market fatigue and in retrospect perhaps should have been pushed through earlier to take place when markets were more buoyant in spring. In the end muted investor interest forced a price at the bottom end of the proposed range.

That makes the first day losses even harder to stomach and may indicate investor concern over some of the controversy Robinhood has courted in recent months. It drew criticism for allowing swarms of amateur investors to pile into positions designed to ‘shake out’ shorting hedge funds by driving the price of stocks they had targeted up. It then faced a backlash from the same investors when it bowed to pressure and prevented trading on the stocks most favoured by them. Regulatory scrutiny has also stepped up in recent months.

Robinhood, which says its mission is “democratising finance”, was founded 8 years ago by Stanford University graduates Vladimir Tenev and Baiju Bhatt. Chief executive Tenev’s stake in the company is now worth $2 billion and Bhatt’s $3 billion.

The app’s commission free trading motto has attracted 21 million monthly active users, whose numbers multiplied over the Covid 19 pandemic. More time to devote to online trading and market volatility offering more attractive trading opportunities than under normal conditions are believed to be the main drivers of the increased interest in the sector, especially from younger demographics.

The company was fined a record $70 million by Wall Street regulator Finra last month for, said the watchdog, causing “significant harm” to its customers by giving them unrestricted access to risky bets on financial markets. The regulator highlighted the case of a 20-year-old user who killed himself after erroneously thinking he had suffered losses of over $700,000.

Further investigations by regulators expected over coming months was also revealed to investors ahead of the IPO, presumably contributing to yesterday’s share price decline.